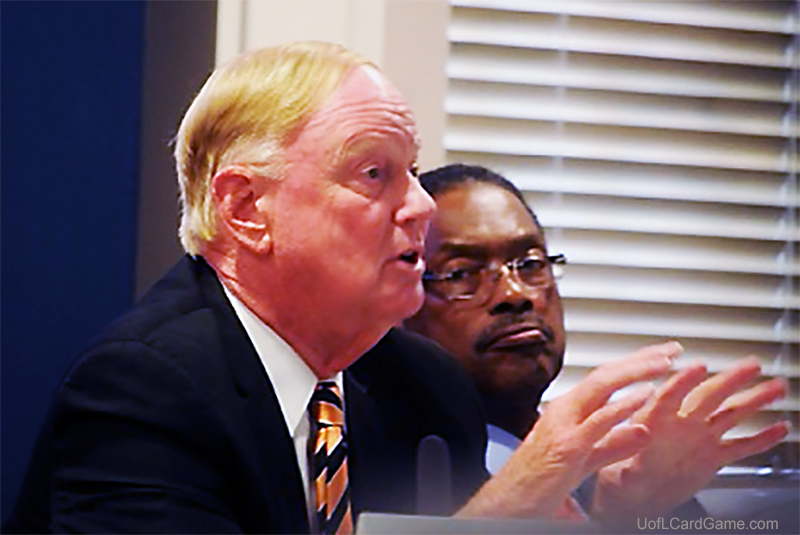 The nightmare continues for University of Louisville supporters, with little promise of the drama going away anytime soon.

The newly-appointed UofL Board of Trustees named by Gov. Matt Bevin last month is getting off to a slow start, taking its time to review the proposed budget and the future of President Jim Ramsey.

About halfway through a presentation on a $1.3 billion proposal Thursday, Chairman Junior Bridgeman surprisingly stated the the board would not be approving the budget. He indicated that a committee composed of board members would “dive deeper” into the budget before arriving at any conclusions.

Bridgeman also indicated that the Board of Trustees has not had any discussions with Ramsey about his future, though he had offered to resign during the previous meeting. “That’s a major issue, but we have other issues to discuss as well,” he said. “We hope to resolve the matter at our next board meeting.”

The chairman would not disclose how he was leaning, saying it was the board that would make the final decision on Jim Ramsey’s future at UofL.

As for the budget issue, it was unclear whether Bridgeman made the budget decision based on the presentation or whether he was reacting to complaints from a student and her mother who interrupted the meeting several times, protesting a proposed 5% increase in tuition.

Bridgeman was noncommittal after the meeting, indicating that he thought that dialogue with students was healthy. “That’s what a university is about,” he said. “It’s about open discussion, open thinking, the exchange of ideas, debating different ideas. If you’re not happy with something that going on, it provides a forum to address that.”

The chairman was being too kind, ignoring the disruptive nature of the feedback. The criticism appeared premature, the students calling the Bevin appointments illegal while assuming the board had already decided to approve the budget.

He promised students, however, that they would be invited to make comments during the committee meeting on the budget.

UofL supporters can only hope that the current board is allowed to continue to do its work. If a Franklin Court judge issues an injunction, the old members will be back, ensuring continuing chaos well into the future.

One thought on “Bridgeman: No discussions with Ramsey about his future at UofL”