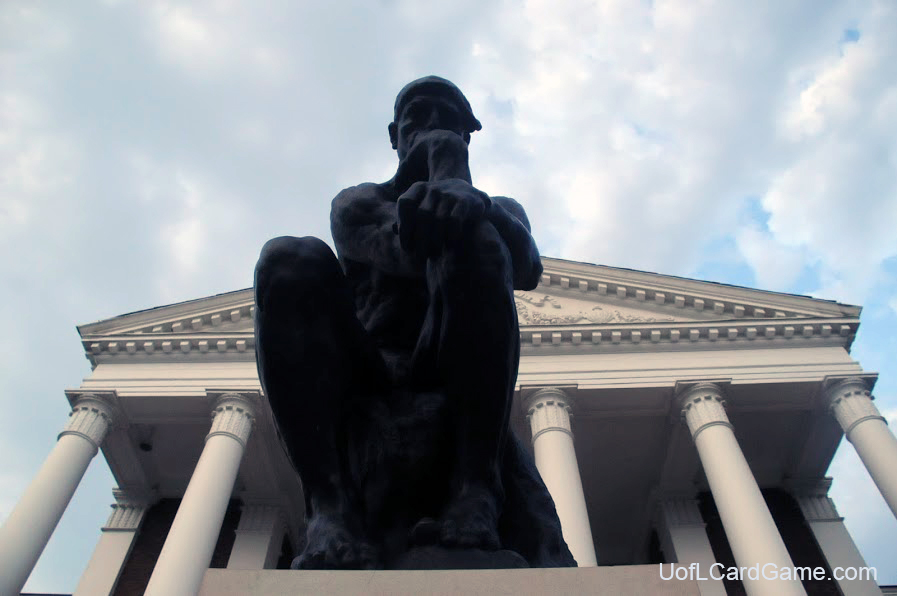 The Thinker is more alone today than ever on his perch in front of Grawemeyer Hall.

Jim Ramsey earned and deserved a farewell tour over the next academic year as President at the University of Louisville. But after six hours of negotiations on Wednesday, his offer to resign was accepted, effective immediately.

The Jim Ramsey era, from 2002 to 2016, will be remembered as a time of unprecedented growth for the University. Great strides in all areas of endeavor, including academic, athletic, student enrollment, graduation rates, and physical facilities.

Under his guidance, the school experienced a metamorphosis of mammoth proportions, transforming from a small sleepy aging commuter school to a dynamic campus attracting thousands of campus residents. This was accompanied by beautification efforts that left no area untouched, ranging from the restoration of The Thinker to the addition of striking new entrances on all sides of the campus.

Jim Ramsey may have done his job too well to suit some people, some of them threatened by UofL’s incredible advancements. Among them Steve Beshear, the former Governor, who ignored laws concerning university boards, placing donors on the board who had questionable loyalties to UofL.

Among the board members were some developers who resented the competition from the University, which was expanding in South Louisville, on the downtown medical campus and on the Shelby Campus in the East End. This along with plans for a major research park in an area adjoining the Speed School and Papa John’s Cardinal Stadium.

Born and raised in Louisville, Ramsey was a leader with inexhaustible energy, dedicated to the University, totally driven in desire to take UofL to plateaus that would have been unimaginable 20 years ago. The legacy will continue to grow and flourish long after the President cleans out his desk on Thursday.

Coincidental to all the progress at UofL in recent years came some troubling issues that were neither his fault or remotely under his control. Trusted individuals helping themselves to federal grant monies, blackening the eye of the University, time and time again it seemed, tainting the administration.

A local newspaper fixated on the negative. Old money people wanting to exert their influence on a growing university. Developers resenting the University’s growth. Gubernatorial appointments clearly designed to create division on the board. The controversy continued to grow, eventually overshadowing all the good that had been accomplished.

Governor Matt Bevin forced to dismiss an entire Board of Trustees. Attorney General Andy Beshear filing a lawsuit to declare the appointments illegal and, in the process, leading to a circus atmosphere, creating uncertainty. The new board concluding that Jim Ramsey was becoming a magnet for controversy and that a new beginning was best for the University.

Jim Ramsey should have been riding on the shoulders of appreciative UofL alumni and supporters as he departed the campus on Wednesday. He leaves behind a legacy of accomplishments and respect that will be difficult to match. He also leaves a strong foundation that will make it possible for his successor to envision achieving the goal of becoming one of the nation’s premier metropolitan research universities.

Jim Ramsey was well on his way to making that happen.