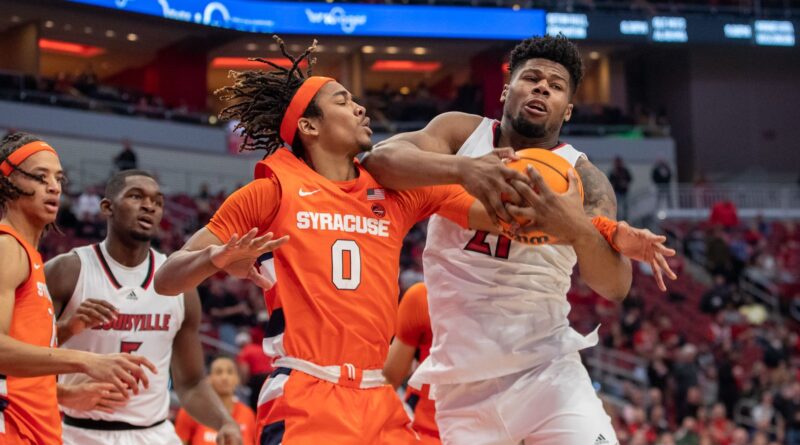 One could sit here and nitpick every thing this University of Louisville basketball team did to lose a 70-69 decision to Syracuse, Tuesday night at the KFC Yum! Center. That would take multiple posts so will try to simplify.

There were many little errors that caused this defeat. The Orange (10-5, 3-0) and a winner of seven straight games did just enough.

The Cards (2-13, 0-4) had one last chance but senior El Ellis had the ball tipped away by center Jesse Edwards as he drive the lane during the last seconds. When Ellis lost the ball, Syracuse threw the ball to the other end of the floor. Game over.

UofL’s 21 turnovers led to 25 Syracuse points. The 14 in the first half prevented Louisville from having a bigger half time lead (35-34).

The positives. Louisville had 17 assists on 22 made baskets but shot 42.9 percent from the field, including 11 of 27 threes. They were only four of 10 at the free throw line. The Cards committed 20 fouls to 13 for the Orange. Bench points were in favor of the Cards 12-3. But its another loss.

Ellis led Louisville with 20 points while make James added 19. Jae’ Lyn Withers finished with eight points and missed a potential game winning shot along the right base line during the last few seconds. Withers was four of 11 from the field.

“I told the guys don’t look at the end and all the mental mistakes,” said Coach Kenny Payne. “You deserve a win, you fought your tails off. It shows you how fragile winning and losing is. J.J. misses. Mike gets tentative (on a play).

“I want to earn it. What I take away is, we are getting better. I’m screaming and yelling. I lose sleep at night. But they are making strides,” said Payne.
“That’s why we have three hour practices to grind. They deserve to win. They are fighting, they are good players. But we have to earn it. We need it.”

Another opportunity for victory comes Saturday against visiting Wake Forest (10-4, 2-1) at 3 p.m.

One thought on “UofL comes to play, but falls short against Syracuse”