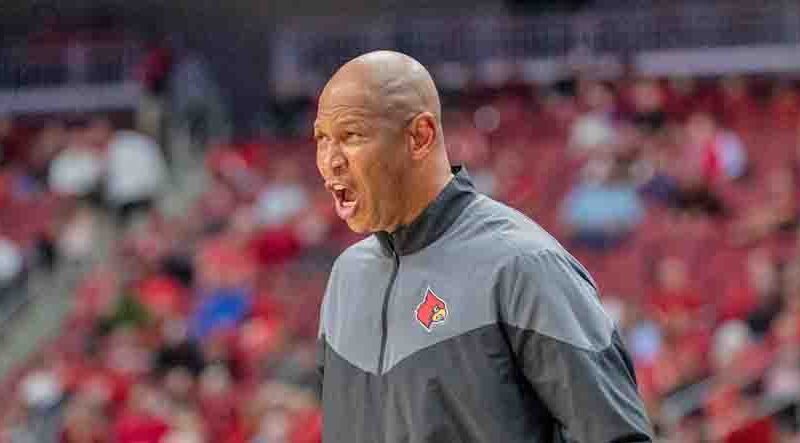 Recent comments and actions from University of Louisville Men’s Basketball Coach Kenny Payne have begrudgingly forced me to come face-to-face with questions that I had lingering in the back of my mind when he was hired, but never thought could be possible, much less actually come to fruition.

Is Kenny Payne milking the University of Louisville?

In March of 1986, I vividly remember sneakily picking up the old rotary phone in a bedroom to anxiously eavesdrop as my mother called my Fern Creek Elementary fifth-grade teacher, as she either preemptively asked for permission or forgiveness (I forget which), for my parents taking me out of school to go to Dallas to watch UofL play in the Final Four. There was a possibility, in my 9-year-old mind, that Mrs. Osterman would veto the absence and I would be relegated to watch my beloved Cardinals on television while my parents lived it out in person.

Mrs. Osterman obliged, however, and one of my favorite lifetime memories was inscribed in my brain as I watched the final seconds of the clock in Reunion Arena tick off in Dallas. I found myself elated and hugging strangers in the upper deck of the arena as Kenny Payne embraced his teammates down below on the hardwood, fresh off a triumphant 72-69 defeat of the Duke Blue Devils for the 1986 National Championship. The 6-foot-8 freshman forward from Laurel, Miss., didn’t score in the game, but found himself a national champion anyway.

Fast-forward 36 years later and Payne finds himself as the head shot-caller for his alma mater, riding on a wave of expectations that were founded on him being connected to the movers and shakers of the college recruiting landscape. This groundswell of promise was rooted in his earlier assistant coaching stops at the University of Oregon (aka Nike U) and in Lexington, where Payne was a fundamental part in grabbing some of the best recruits every single year and supposedly being a “big-man whisperer”. Year after year, Payne seemed to be the guy with all the connections, through Nike and recruiting power-broker William “World Wide Wes” Wesley, that orchestrated top-ten classes and future NBA All-Star rosters on a college sideline. Before Name Image Likeness (NIL) took over the business, ethics of his tactics were questioned by every fan base not grounded in Lexington.

When the head coaching vacancy reared in Louisville, the very short list of rumored candidates had really only one name that actually had a chance this time around, Kenneth Victor Payne.

Being an assistant for the NBA’s New York Knicks at the time, some sources say the Payne had to be talked into taking the Cardinals gig, as he was on the fence about whether or not he wanted to take on the role, being 55 years old at the time. That’s a mesozoric-aged beginning for a head coach. One would be right to question the desire to actually be a head coach of a person with the resume of Payne having made it that deep into a coaching career and never sitting in the first chair.

But here we are, with UofL now sitting 2-13 at the beginning of 2023, a worst-case scenario that most of the fan base would have never dreamed possible. So, it begs the aforementioned questions:

Would he be able to come to town on fire to fix the plethora of problems in the basketball program?

No. He took weeks to even get to Louisville. He took even longer to get his staff hired and on the ground.

Would he hire a top-notch staff to compensate and supplement his lack of experience as the head man?

No. At first, the hires on paper looked legit. As the season has gone by and things have leaked out about practices being horrendous and players looking like they’ve actually regressed, this looks like a failure as well.

Would the best recruits flock to Kenny Payne?

No. Without turning into a whole recruiting-failure article in itself, the short answer is no. The headliner and one of the biggest draws for hiring Payne was the connection he has/had with top recruit DeJuan Wagner and that hope has since been flushed, along with others. As of today, there is not much recruiting light at the end of that tunnel either.

Would he use NIL to its potential as a sleeping-giant for UofL?

No. With his earlier in the season comments on his recruiting philosophy and how it pertains to NIL, this seems like a disaster of a public relations comment to make. His own words, “Yeah, I have NIL money, but you’re not going to come to this university because of that. I have something that’s more special than NIL” were out of touch for what was needed on the recruiting front.

Would he use the transfer portal as the tremendous tool it can be to immediately bolster the roster?

No. Yet another turnover here, as several key names seemed to be in Louisville’s grasp early, then slipped away at decision time.

Would whatever team did show up for the season look inspired and in shape?

No. The evidence is on the court for the world to see, as numerous videos abound of players jogging back, not hustling for loose balls, giving up in the middle of plays, and the list goes on.

Did Kenny Payne win those games?

No. Sorry Eric Wood, we love you greatly, but it looks like you were wrong this time. His inebriated, viral trolling suggested that Kentucky’s success over all these years could actually be attributed to Payne’s coaching expertise funneling through John Calipari, leading to a multitude of high draft picks and a national championship? In hindsight, it’s looking more and more like Phil Knight won those games.

Would he have the fire that is needed for the in-state rivalry?

Big time no. As the final seconds ticked off in Rupp last weekend, the main reason I tuned into that dumpster fire of a game, was to see how Payne would handle the handshake line with Calipari after the inevitable drubbing that was coming. Payne came very close to making out with the same coach that left his starters in up over 20 points at the end of the game. Double high-fives, laughing, ear-to-ear smiles, laughing, bro hugs all around. Not what an aching fan base needed to see in that moment. If you’re that close with the guy that kept the National Player of the Year in to beat you senseless in embarrassing fashion, at least meet up for dinner afterwards somewhere off-camera away from the national television audience and the multiverse to see.

Now for the big one.

Remains to be seen. But the further this failed experiment drags on and how Payne handles what seems to be inevitably coming down the pike, either this season or God forbid the next, the more and more evidence piles up for that conclusion.

Taking the job and coaching a season ensured millions in his bank account. Coaching a whole season, with what looks to be sum-optimal effort and tanking, ensured those same millions. Repeating that same performance for another year ensures even more millions. At any point, if he has to be forcefully removed, yet more millions.

Does Payne have the self-awareness to realize all this? Is he content with smiling and “coaching” as long as Athletic Director Josh Heird will let him? When he turns around in the YUM! Center and sees empty seats and opposing school colors outnumbering warm bodies wearing red and black? Was the vomitously warm, welcoming ovation at Rupp Arena for a Cardinal coach loud enough for him to hear the hidden message in its meaning?

I am what could be called a “true Louisville fan.” I’ve been a fan consciously since I was four years old in 1979. I was here before him and here while he was in Lexington. I’m still here while we’re 2-13. I’ll be here after he’s gone whenever that is.

I was completely on the fence as to whether or not to even write this lamentation, but the theatrics at midcourt Saturday pushed me off the proverbial fence. Until Saturday, I was in the camp of this year absolutely was a disaster, but let’s see what he does in the offseason without the IARP cloud hampering things, but the signs and body of evidence is there, however the fire and the hunger in his attitude are not.

Love for the University of Louisville and its rightful place in the highest echelon of college basketball should be pushing Kenny Payne off of the fence on to the side of doing the right thing and walking away at the end of the season — not intentionally or unintentionally milking the school any longer.