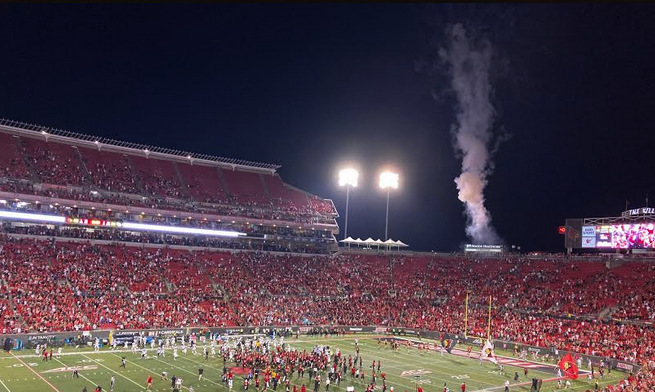 This writer has had a couple of days to sift through the Louisville football team’s last second win over Central Florida University. He is just as confused now as he was following that unlikely victory.

It appeared the game was headed to overtime before things turned crazy in the final minute. Junior quarterback Malik Cunningham, who played one of his best games as a Cardinal, having a pass tipped and intercepted by Tre’mon Morris-Bash. UCF taking over on the Louisville 41 with 25 seconds remaining.

What happened on the next play was almost miraculous from UofL’s standpoint. Disastrous from UCF’s perspective. Jaylin Alderman intercepting a Dillion Gabriel pass and returning it 66 yards with 12 seconds to.

What a shift in fortunes. If Louisville loses the game, the heat instantly increases on Coach Scott Satterfield. The team falls to 1-2 with two difficult road games at Florida State and Wake Forest. How things changed in a hurry.

Instead Card nation partied well into Saturday. “I still can’t believe we won that game,” said one Card fan leaving the stadium. The venue was alive with enthusiasm all night. The team brought excitement and the 39,022 fans made it electric and hard for the visitors to operate.

The Louisville Athletic Department needed some good news. There has been so much negative surrounding the program from stadium operations to Vince Tyra to Satterfield. Cardinal fans needed something positive and this team delivered.

“Incredible college football game,” said Satterfield. “ESPN they live for games like that. What a show, feels great to be part of it. Just proud of our guys who were flying around offense and defense and make plays. It wasn’t perfect.”

What if UCF kicks a game winning field goal or scores a touchdown and wins? Fire Satterfield. Cunningham is a bum. The defense is terrible. But UofL won and that’s all that matters now. We view things so differently after a win.

Next up is Florida State at Tallahassee. The Seminoles (0-3) haven’t been the same since an overtime loss to Notre Dame 41-38 in week one. FSU lost in Tallahassee two weeks ago to lowly Jacksonville State, 20-17.

Saturday, the Seminoles never seemed in the game, losing at Wake Forest 35-14. “No way did we ever give ourselves a chance to play winning football,” said FSU Coach Mike Norvell. “We continue to see the same mistakes that cost us in the previous weeks.”

By the way, Ole Miss (3-0), Louisville’s opening opponent, hung 61 points on Tulane. The Rebels travel to No. 1 Alabama (3-0) next Saturday. Think maybe Mississippi is as good as it looked against UofL? Would be nice.

One thought on “Scribe still in shock after win over UCF”