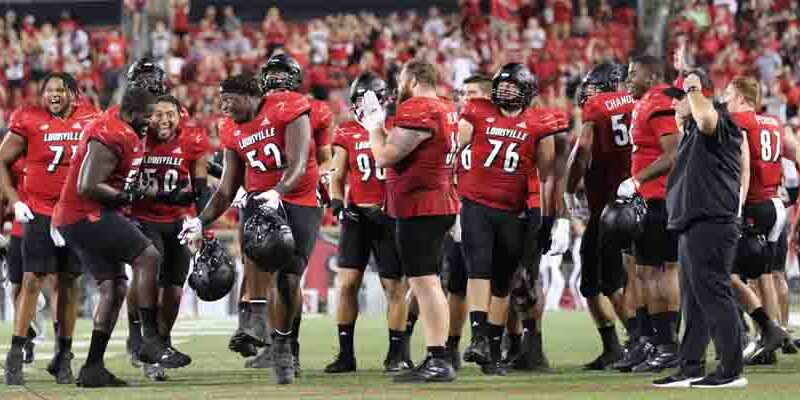 This was one of those games that will live on in the minds of University of Louisville football fans. Not just for the unbelievable final play but for everything that goes into making a game a classic event. An intense, suspenseful affair, each play more important than the last, the crowd of 39,022 working hard, cheering feverishly, expecting, demanding that UofL football rise to the occasion.

When it was all over, Louisville had defeated Central Florida University 42-35.

The crushing blow delivered by linebacker Jaylin Alderman. Just entering the game, his first and only play of the game. Intercepting a tipped pass from UCF Dillon Gabriel in the center of the field, sweeping wide right, shifting into high gear, returning the ball for a 66-yard touchdown. Delivering a much-needed win, a booster shot of adrenaline, and sparking a delirious celebration for the Cardinals.

Alderman, a freshman from Valdosta, Georgia, a mecca for high school football. Choosing Louisville over offers from Cincinnati, East Carolina, Appalachian State, Florida International, Charlotte, and Middle Tennessee. And are Cardinals happy that he did. He was not going to be stopped on that memorable jaunt to jubilation in the final seconds.

“The reason why he gets to get into game is because he is as smart as any one of our linebackers,” said Louisville Coach Scott Satterfield. “He’s a true freshman, but he studies everything and he just knows what to do when you put him in. That was a little bit different circumstance because we’re in prevent mode. They got the ball right there and you don’t want to give up a touchdown. But, that’s why he went in because we felt like he knew what to do in that scenario.”

A vast contrast from the opening series when UofL went for it on fourth down and failed miserably. Central Florida quarterback Dillon Gabriel connecting with Ryan O’Keefe two plays later for a 41-yard touchdown pass. Groan. Not a good start, miserable, someone next to the Observer remarking, “This place is going to empty out in a hurry if that keeps up.”

Fortunately, the all-too-quick UCF touchdown was an aberration, the teams trading series of downs. Louisville keeping the vaulted Golden Knight defense at bay on the next two possessions. UofL gets on the board with a seven-yard jaunt by quarterback Malik Cunningham. Still in the game, confidence growing, the Cardinals were not going to roll over. Actually taking a 21-14 lead into the half after a seven-yard touchdown pass from Cunningham to Marshon Ford.

The kind of win Cunningham needed, a win over one of the rising football programs, a school that just accepted an invitation to join the Big 12 Conference during the past week. He ran for two touchdowns and threw for another TD in helping Louisville. He was 23-of-38 passing for 265 yards while rushing 13 times for 99 yards.

Nice to see UofL has a little extra in the playbook, responding to a UCF trick play and a touchdown with one of its own. Wide receiver Braden Smith completing a 45-yard pass to a wide-open Trevion Cooley  for a touchdown and 35-28 lead in the fourth quarter.

“We’re not listening to the noise that’s been out there, our kids just continue to fight and that’s what happens,” said Satterfield. “This game is just one game. It’s one game. There’ll be another one next week. I told them they can have tomorrow off since we have a free day, they can have tomorrow off to celebrate this win, but Sunday we have to get back in here and get ready for Florida State.”

A fun night, the Cardinals bringing fun back to Cardinal Stadium, flashbacks and memories of some great seasons for the Louisville program. Providing hope that more good days are ahead. Celebrate for a couple of days, savor it, and head back to the future.