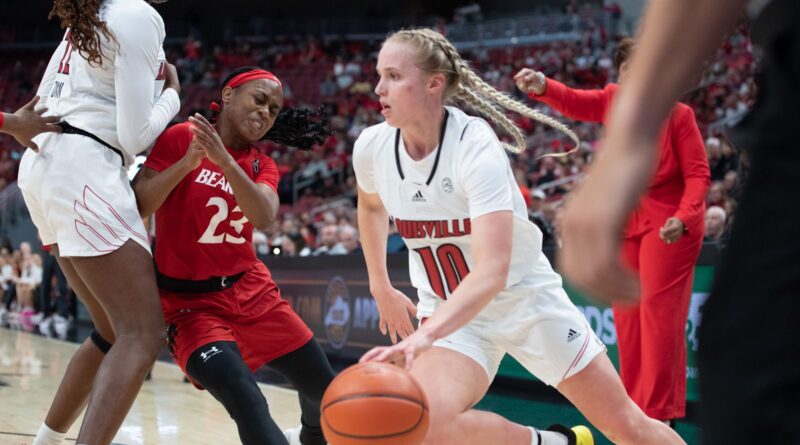 Make no mistake. This University of Louisville women’s basketball team may have more quickness. More athletic ability. More depth. But it is still Hailey Van Lith who stirs the offense.

Haileya and her fellow Cardinals jumped on Cincinnati early in the 2022-23 season opener, staved off a mild rally, to claim an 87-68 win on Monday at the KFC Yum before 8,019 fans.

When things started to go a little sideways early in the second half, it was Van Lith that helped hold off Cincinnati, coached by former Atherton High standout and Louisville assistant Michele Heard-Clark.

Van Lith finished with 28 points while transfer Morgan Jones added 14, Liz Dixon had 12. Olivia Cochran had four points and eight rebounds. The Louisville bench scored 28 points and played 12 players. Van Lith was 12 of 20 from the field (two of seven threes) and had two assists. Her scoring in the third quarter six straight points and had a pass to Liz Dixon for a layup that started an 8-0 run. Dixon finished with 12 points.

UofL always seems to get a big lift from sixth year senior Mykasa Robinson and Monday was no exception. She came off the bench with six rebounds, three assist and five steals. In all Louisville had 28 bench points.

“I’d like to say Hailey had a phenomenal game. She just did Hailey type things,” said Robinson . The Cardinals made 51.7 percent of their shots, out rebounded UC 39-27, forced 24 turnovers and had 14 steals.

Both teams pressured some full court with the Cardinals turning it over 18 times Louisville’s 20 point lead was sliced to 52-44. Van Lith assisted on a pass to Liz Dixon for a layup. Then the junior from Wenatchee, Washington, scored the games next six points completing an 8-0 spurt late in the third quarter leading 60-44.

“We have a lot to work on,” said Walz. “There was some ugly basketball in the third quarter. I put Kasa (Mykasa Robinson) in there and she guards her man and three others.