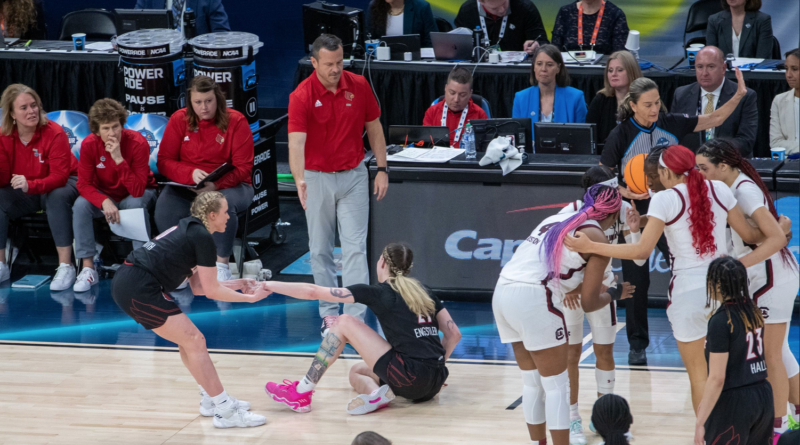 Any suspense about the outcome of the Final Four game between the University of Louisville women’s basketball team and South Carolina ended when UofL’s Emily Engstler went down in a tumble and was called for her fifth foul.

She was done, UofL was done in its fourth trip to the Final Four under Jeff Walz in his 15th season.

Engstler knew it, head in her lap on the bench, her college career over, her year with the Louisville program. Weeping uncontrollably, unable to control herself or offer encouragement to her teammates. Close to five minutes remaining the game, her team trailing by nine points. The cause was lost. Not that her early departure diminished all the great memories of her transfer year at UofL. A year she describes as one of the best years of her life, falling a game short of the national championship.

Another abbreviated ending for Engstler but still another impressive performance. Contributing 18 points and nine rebounds, with four steals and an assist. Emily had done everything possible to help UofL be competitive in the 72-59 loss. Just not enough Engstler to go around.

Kianna Smith, also playing her last game, would leave memories of her shooting skills, making seven baskets for 14 points. She would play all but one minute in the game, also pulling down five rebounds. So smooth, so consistent, her shot-making abilities will be missed.

Olivia Cochran, playing with that plastic mask, still recovering from an elbow to the eye. Stuck with the tough assignment of all, trying to contain South Carolina’s Aliyah Boston, the national player of the year. Not really successful, with Boston scoring 23 points and pulling down 18 rebounds. Cochran was whistled for a foul on a her first defensive play, but she did manage to finish the game with four fouls. She also scored 14 points and grabbed four rebounds.

Hailey Van Lith in a game she won’t soon forget. No respites from the nightmarish experience, playing the entire 40 minutes. Getting her first three-point attempt stuffed down her throat, the focus of South Carolina’s undivided attention, face-guarded, double-teamed, denied the ball. She could only attempt three three-point attempts, winding up with only nine points in one of the most important games in her life. Lessons learned, something build on, but the tears flowing the post-game press conference.

A fun season, with fans returning to the sidelines, and Louisville among the nation’s top five teams for most of the year. Actually a surprisingly great season, with a team that far exceeded anyone’s expectations with a 29-5 won-lost record and a Final Four finish. The results reinforcing the coaching abilities of Jeff Walz and his abilities to get the most out of his players while maintaining their respect and admiration. Back to the drawing boards once again for Walz, all a part of the job, motivated, all in, totally focused on achieving a national championship at Louisville.

Somewhat disappointing Jeff Walz’ rant against the sports media in the post-game press conference, accusing them of ignoring Louisville’s impressive NCAA participation over the last decade or so. Saying the media focuses on the negative for the purpose of selling newspapers and attracting Internet clicks, not giving UofL enough credit.

Fact is UofL was competing in a Final Four in which the opposition, including UConn, Stanford and South Carolina, have won a total of 14 national championships. UConn with 11, Stanford with two, and South Carolina one a couple of years ago. Former national champions were inevitably going to get more media focus. Until Louisville actually wins one, the Cardinals will continue to receive less than desired attention.

Calling the sports media out is not going to change anything.The sports media, consisting largely of former non-jocks and self-appointed experts, actually relishes negative attention, thrives on it, in fact. Calling them out only diminishes a coach  in their eyes, bringing you down to their level.

Until a coach gets the players he needs and actually wins a national championship, no matter how good he or she is, that coach will always feel slighted and have something to prove.

Great coaching job, Jeff, but ignore the scribes. Media coverage is secondary to the game.

The Observer would like to thank Mike DeZarn for all the great photography during the past academic year, including football, men’s basketball and women’s basketball, volleyball and lacrosse. Mike does this because of his love for University of Louisville athletics and a desire to advance his full-time avocation to a professional level.

Mike does not receive any remuneration, only the admiration of people who enjoy his work. During the past week, he made the trip to Minnesota on his own, receiving only press credentials from UofLCardGame. It’s a 10-hour trip each way, negotiating the freeways via I-65 through such cities as Indianapolis, Chicago and Minneapolis on his own and paying for food and lodging.

We greatly appreciate his contributions and look forward to his continuing contributions. Mike also does special events by the way, contact him at 502-491-0150 if you want to get in touch with him. He’s one of the best.