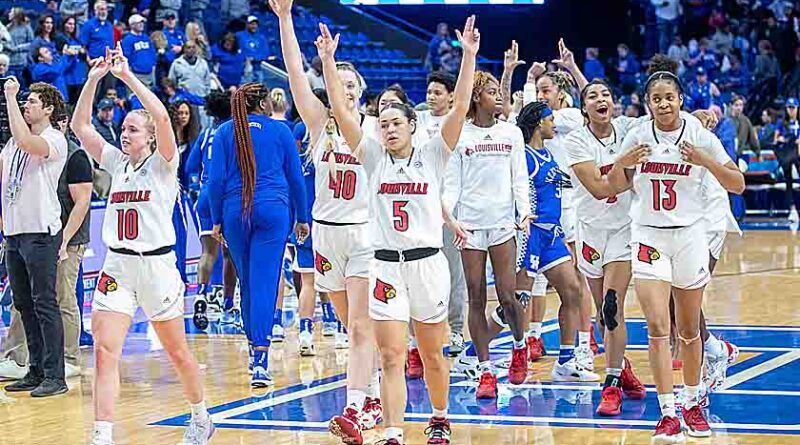 The last thing anyone among fans of University of Louisville women’s basketball team expected was a rout of their University of Kentucky counterparts this season.  The Cardinals have had more than their share of problems thus far, entering Sunday’s game with a lackluster 6-4 won-lost record.

While it wasn’t exactly a rout, the UofL women were impressive in denying the Wildcats any real chance of winning the regular season rivalry game. Louisville opened with a 21-14 lead after the first quarter and were never seriously challenged thereafter. The final score was UofL 86-72 in front of a crowd of 7,927 at Rupp Arena.

The win was the sixth straight for Coach Jeff Walz over Kentucky. The loss was only the second for UK in eight games this season.

“We needed a win like this against a good team,” said Walz in the post game press conference. “We worked on a few things in practice this week and came prepared to play.”

Walz can thank Liz Dixon for the Cardinals off to a good start. Dixon letting the Wildcats know soon after tip off that she was taking the game seriously. She would score six of her team’s first 10 points and wind up with a total of 16 points. That player who comes out of nowhere, making the difference in a heated rivalry game.

Hailey Van Lith, as usual playing all 40 minutes, providing a steady hand. She does so many things well her coach rarely pulls her. Not a great offensive performance, Van Lith would make only four of 16 field goal attempts but would sink 13 of 15 free throw attempts to lead all scorers with 21 points.

Morgan Jones had 12 points, a season-high eight rebounds and tied a career high with four blocks. Olivia Cochran had a team-high nine rebounds to go with nine points.

Signs of encouragement for a team that incurred some surprising losses coming out of the gate for the 2022-23 season. UofL returns to action against Bellarmine University at Freedom Hall on Wednesday at 6:30 p.m.