Still looking for the most economical way to get to Orlando for the Louisville-Miami football game?

Miller Transportation is offering a two-day Russell Bowl package that includes a motor coach, two nights of lodging and free breakfasts each day, starting at $460 each per person double, triple or quad. The rate for a single individual is $585. 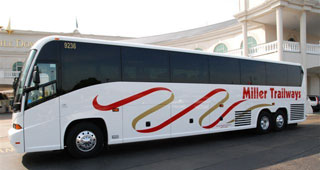 The group will be staying at the new Hampton Inn & Suites in Ocala, which has numerous restaurants within walking distance. Ocala is about 75 miles from Orlando, with transportation to the stadium on game day. Game tickets aren’t included.

The motor coaches are similar to the ones use for the Sugar Bowl excursion in January and are equipped with free WiFi. The coach will depart Louisville at 5 a.m. on Dec. 27 and return Dec. 29 at 11 p.m. in Louisville.

2 thoughts on “Transportation deal for the Russell Bowl”