Almost overlooked with the nearing completion of Papa John’s Cardinal Stadium football expansion and the KFC Yum Center basketball palace has been all of the other construction occurring in recent years at the University of Louisville.

The growth in new physical improvements has been phenomenal, adding up to more than $1.2 billion in capital projects since James Ramsey became U of L President in September 2002, according to a recent report in Business First Louisville. 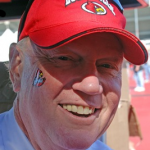 Unprecedented growth during a period in which budget cuts in state funds have become the norm. New student housing, clinical and research buildings, athletic facilities and parking structures.

“But perhaps more important, the improvements are enabling the university to attract better students, create a stronger work force and work toward the state legislatureâ€™s mandate to become a premier metropolitan research institution …Â By teaming with private developers and tapping various sources of nontraditional funding, U of L is reshaping not only its Belknap, Shelby and Health Sciences campuses but the neighborhoods that surround them.”

Still in the pipeline: a 10,000-square-foot Westside Dining on Third Street, a $43 million expansion of the Dental School, a $2.7 million boathouse for the rowing team, a $9.7 million expansion of Preventive Medicine on Shelby Campus, and a $55 million redevelopment of the old Masterson’s Restaurant property.

10 thoughts on “Ramsey oversees building boom at University of Louisville, more to come”