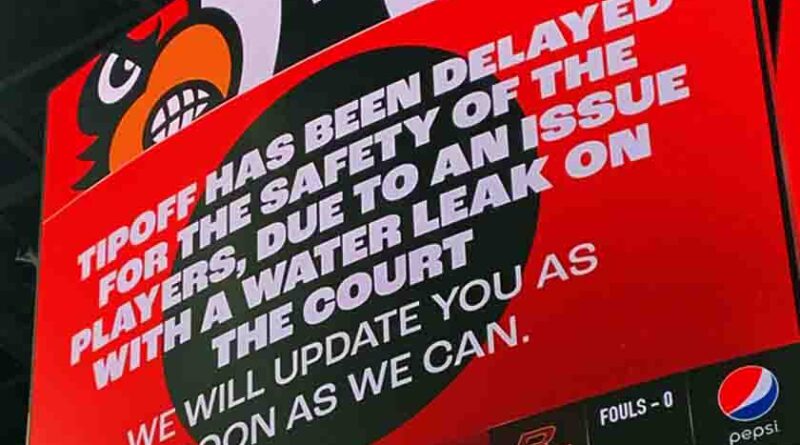 First time for everything, in this instance a leak in the KFC Yum! Center roof at tipoff (Mike DeZarn photo).
Basketball
Charlie Springer 2 min read

Just when University of Louisville men’s basketball fans think they have seen everything, the KFC Yum! Center springs a leak. Literally. A steady stream of water was cascading from the ceiling to the floor in front of the free throw line at the south end of the court.

The pride of downtown Louisville, the most popular facility in the community, best known outside of Churchill Downs. The structure that brings people back downtown in good times and bad times, a $238 million-plus development, humbled by a leaking roof. The game delayed by an hour and 18 minutes while crews work desperately on the roof for a quick, albeit temporary, fix. One can bet that the crews were back up there Thursday morning checking every square foot of that massive canopy.

The floor was dry when the tip off finally took place but the game was played a very slow pace. More of the tendencies of the UofL and Boston College teams than any concern for the condition of the hardwood. Louisville outlasting the visitors 67-64 in front of a crowd of 12,123 on Wednesday.

Fortunately for the Cardinals, Sydney Curry was back after missing one game because of an ankle injury. The player UofL cannot afford to be without, capturing team-scoring honors with 13 points. Earning all of those points where they are the most difficult to obtain, while being bumped and bruised beneath the basket. No problem for him, he give as well as he takes. Curry also had seven rebounds during his 24 minutes of playing time.

Jae’Lyn Withers earning 22 minutes of playing time, playing the best game anyone can remember despite three turnovers. He would contribute 10 points and five rebounds that were badly needed. Earning some respect after a few disappointing outings this season.

Noah Locke with 10 points on three of seven 3-point attempts. Malik Williams, in for 22 minutes, pulling down eight rebounds and adding five points, including a 3-pointer.

Not an impressive performance but a win and that’s what counts.