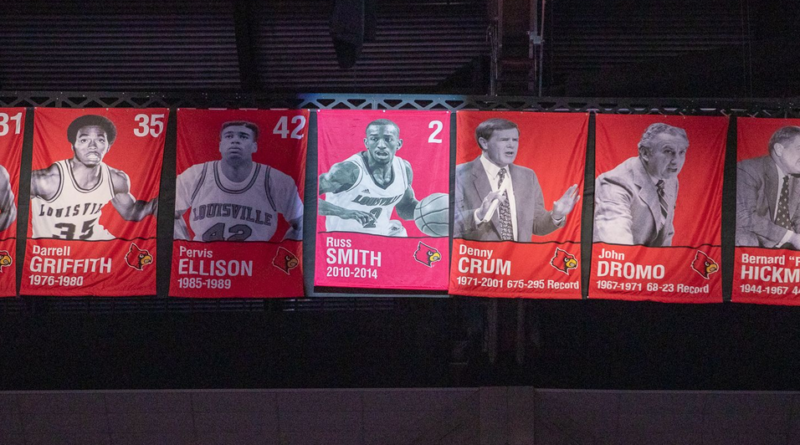 The jersey No. 2 of Russ Smith is up there with the great ones, including Denny Crum, Darrell Griffith, Wes Unseld, Peck Hickman and John Dromo (Mike DeZarn photo).
Basketball
Charlie Springer 3 min read

It was a Russ Smith kind of day in the first half Saturday with the University of Louisville and Notre Dame basketball teams connecting on 16 of 22 three-point shots during the first 20 minutes. UofL, sizzling, putting nine of 13 three-point attempts through the net. Nothing like it this season and it probably will not be duplicated again in the near future.

Threes falling like rain from the sky in the KFC Yum! Center on a day when Russ Smith’s No. 2 would be hoisted into the rafters alongside such UofL greats as Darrell Griffith, Wes Unseld, Charlie Tyra, Pervis Ellison, Denny Crum, Peck Hickman and John Dromo. The kind of shots Russ Smith was famous for, the kind that made him a megastar, someone whose mere mention warms the collective heart of Louisville basketball fans. Even Jared West getting in on the action, with four of four long-range shots in the first half.

During halftime ceremonies, Smith and his family were the center of attention for the crowd of 16,705, the largest crowd of the season. The first 8,500 fans through the turnstiles receiving commemorative Russ Smith posters, all UofL students sitting in the lower-level student section 111 receiving Russ Smith replica jerseys. Tears and cheers all around.

Quite an achievement for an individuals who never saw any action as a UofL freshman, in fact considered transferring after his first season 2010-11, an awful start for the New York native.  He had a broken foot, concussion, strained foot, and sore knee during the season and saw limited action in 17 games. He actually called his mother near the end of the season, telling her that he was coming home. But that was before Coach Rick Pitino put him in an NCAA Regional game against West Virginia.  Pitino put him in and told him to play hard. He had three points, two rebounds, one steal in nine minutes of action. There was no denying that Smith had played a pivotal role as UofL overcame a late 11-point deficit to win by a single point.

From that point on, Smith was all in, quickly becoming a fan favoarite. He was the team’s second highest scorer during his sophomore year, averaging 11.5 points, 2.5 rebounds, 1.9 assists, and 2.2 steals a game for the Cardinals. Smith would set a school record for steals in a season with 87 thefts in his 39 games. That was the season when Pitino would declare that Russ Smith was Russdiculous, even naming a Thoroughbred after everybody’s favorite UofL player.

Smith also would play a key role during Louisville’s run that culiminated in the school’s third NCAA championship during the 2012-13 season. He tied his career high of 31 points in a 77-69 win over Oregon in the Sweet 16, followed that up with 23 points in an 85-63 win over Duke in the regional championship, and 21 points in a 72-68 win over Wichita State in the national semifinals. He Smith averaged 18.7 points, 3.3 rebounds, 2.9 assists and 2.1 steals that year.

No question that Louisville played its best basketball of the season during those first 20 minutes. Something that was quickly forgotten after UofL lost 82-70 to Notre Dame on a day when the Irish were hitting 15 three-point shots.

That sizzling first half was lost on Courier-Journal columnist Tim Sullivan, who must have missed the first 20 minutes, clumsily asking Malik Williams if the coaching staff had lost the respect of the team.  Williams, a team captain, responding even more clumsily that he was not going to comment on the question.

Sorry, folks, but that first half was as good a half as Louisville has played all season. The question and the answer were both out of place that day.