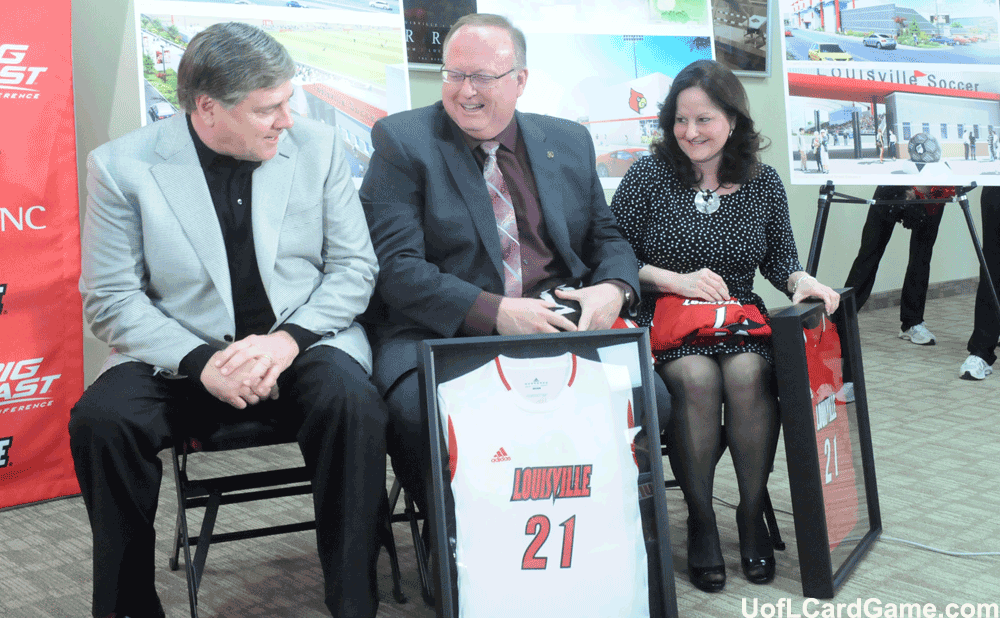 The Taj Mahal of college soccer stadiums is coming your way, Louisville.

Thanks to some incredible generosity from Dr. Mark and Cindy Lynn, providing a game-changing donation of $5 million from their personal resources to break ground on a $17.5 million, state-of-the-art stadium at the intersection of Floyd and Byrne streets.

“The gift came from the bottom of the hearts of two individuals,” said Tom Jurich, vice president of athltics. “This is not a corporate gift. This is one of the top individual gifts we’ve ever gotten in this athletic department and probably for many years to come.

“These soccer teams are going to have the most unbelievable home you could ever have. It’s another cog in beautifying Floyd Street, which is becoming a national story.”

All but about $3 million of money needed has been raised in a fundraising effort, headed by Tom’s son, Mark Jurich, associate athletic director for development at UofL.

“This is going to be the one of the largest stand-alone facilities in the country and is really going to elevate us and take us to a whole new level,” said Mark. “The footprint will be great and will be very visible, located off of I-65, providing over 77 million impressions each year.”

The new stadium will have a minimum seating capacity of more than 5,300 and includes a 15,500 square-foot training facility with locker rooms both both men’s and women’s teams, offices, a training room, a suite and press box facilities.

Ground has already been cleared for much of the property, except for a parking lot. The official groundbreaking will be in June and the stadium should be ready for the start of the 2014 season when UofL joins the Atlantic Coast Conference.

Dr. Lynn, a native of Owensboro, is the owner of Dr. Bizer’s VisionWorld and a former member of the UofL Board of Trustees. He served for a year before stepping down in 2011 when his son Mark J. Lynn was named assistant director of the UofL Cardinal Marching Band in 2011. The Lynns are season ticket holder for both Cardinal basketball and football, with suites at both the KFC Yum! Center and Papa John’s Cardinal Stadium.

“We are fortunate and lucky to even be a part of this,” said Dr. Lynn. “It’s more for us than a soccer stadium and athletics. We are lovers of the university. It is where all my kids have gone. This is where my home, my business, my life is. The better the university does, the better we all do. We’re fortunate to have the ability to give back to give back to the community. Thank you for letting us be a part of it.”

The stadium is designed by Wayne Estopinal, of the Estopinal Group in Louisville, with a staff of design professionals described by the Jurich’s as soccer fanatics “who poured their hearts and souls into this project.”

Soccer Coach Ken Lolla thanked Mark Jurich and his staff for their effort in making the best college soccer stadium in America possible. “We will attract the best student athletes and some of the best competition because everybody will want to be a part of it. There’s already a great awareness across the country, and it will greatly benefit the youth soccer movement around the country.”