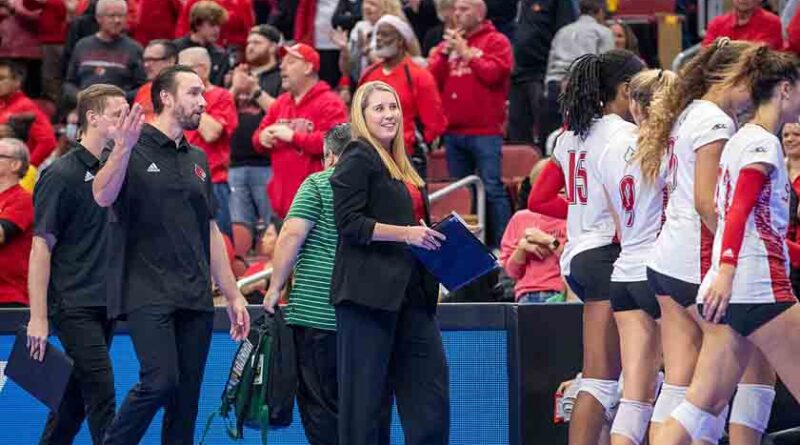 Another win in the books, off to the Elite Eight for Dani Busboom Kelly (Mike DeZarn photo).
Volleyball
Charlie Springer 1 min read

Members of the University of Louisville volleyball team have moved another win closer to their collective dream with a 3-0 sweep of Baylor in the Sweet 16 round of the NCAA tournament. Their sixth consecutive sweep with scores of 25-23, 25-16, and 25-17, putting them in the Elite Eight for the second straight season.

No signs of jitters, no overconfidence, just a businesslike performance, fending off every challenge, looking every bit like the region’s No. 1 seed and one of the nation’s best college volleyball teams. Doing it in front of 5,002 fans at the KFC Yum! Center, looking as good as they have looked all season, improving their won-lost record to 29-2.

Hopefully that’s a sign of more good things to come, the Cardinals now eyeing a second straight trip to the Final Four. Won’t be easy against Oregon, the team that eliminated perennial volleyball power Nebraska earlier in the day. Not supposed to be easy, means more taking down the toughies. Bring on the Ducks. Seriously.

Anna DeBeer, who missed 12 games with an injury, continues to get better, gaining on her old form as an All-American. Leading the way for the Cardinals with 11 kills, eight digs, and two blocks while hitting .364 in the win. Her 11 kills the most since she returned Nov. 4th against NC State.

Something big possible, very soon. Keeping things in perspective, taking care of business will get them there, along with a few lucky breaks. Do it.