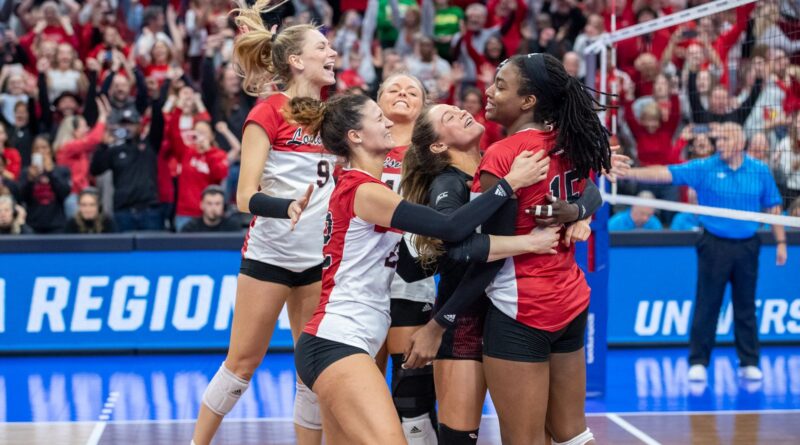 As this writer left the KFC Yum Center Saturday night, he felt like he should have apologized to University of Louisville volleyball coach Danni Busboom Kelly, players Anna DeBeer, Claire Chaussee, Aiko Jones and the rest of the Louisville volleyball team. Could not remember ever having covered a UofL volleyball game.

Not that he was missed or they cared. Every regular season game was sold out. These athletes have some mile high expectations, their focus is on achieving greatness.

What was most impressive was how UofL dug itself out of a deficit. The pressure was intense. The Ducks leading (2 games to one) and leading 24-22 only needed one point. The Cardinals weren’t going home, fighting back to claim the lead and the win in the fourth set. The place went into a frenzy when the final Oregon serve landed out of bounds for a Louisville point.

While the Cards had to battle for a 28-26 fourth set victory, they weren’t going to let a second straight Final Four slip away.

“I think we scared ourselves and I guess we scared the city of Louisville,” said Jones a right side hitter. “The look on our eyes was like, ‘This is not us. What are we doing? Whenever we take a timeout and go back on the court, we need to flip a switch.’ Everyone was on the same page; we are not going out like this. We are not going out like chumps. Instead, we went out looking like studs.”

“They were pushing us in ways that we haven’t been pushed in a while,” said DeBeer, the regional’s Most Valuable Player. “It took every single person on the team to come out and just do their job and get back in rhythm.”

UofL now gets a chance at national title. It will play Atlantic Coast rival Pittsburgh. The Panthers edged defending national champion Wisconsin 3-2. No. 1 national seed Texas will play San Diego State in the other semifinal game.

This team is full of determination and grit. It had to grind it out, not allowing the pressure get to them.  Jones and Chaussee also were named to the All-Louisville Regional team.

It would been a total downer to leave the Yum denied. These are loyal fans that stood most of the fifth set. After claiming the fifth set,  the UofL players erupted in jubilation, slapping high fives, laughing, crying, embracing each other. They would top it off with a victory lap around the KFC Yum! Center court.