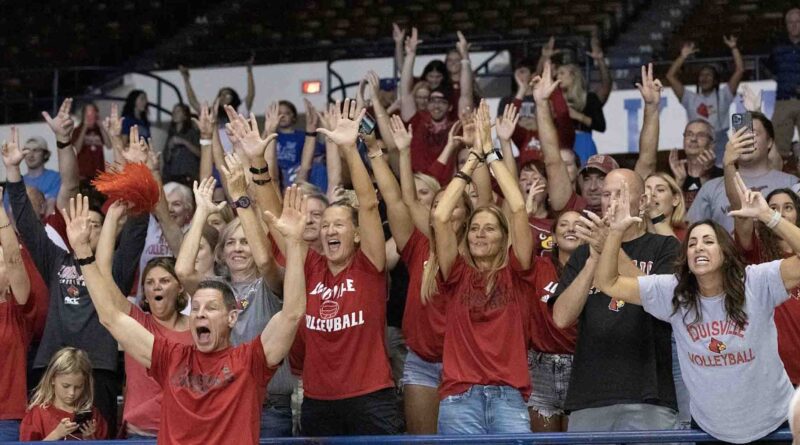 Exactly what one would have expected in a volleyball game between the Universities of Louisville and Kentucky. Constant swings in momentum, emotional ups and down, teams taking turns earning sets, the outcome in doubt until the end. Someone had to win, someone had to lose.

Typical of any match up between Louisville and Kentucky, so much at stake.  No love lost between the schools or the fans. Big deal any game any spot, no matter the won-lost records.

Fans on the edge of their seats at Memorial Coliseum and on couches across the state. The match televised on ESPN, just the fourth regular season women’s college volleyball match to be aired since 1997.

The final verdict this night would go to the third-ranked UofL Cardinals, defeating the 13th-ranked Wildcats 3-2 for the second straight season. Louisville winning the fifth set by a score of 15-11.UK getting off to a scary start with 25-20 win, UofL bouncing back in the second 25-15, UofL the third 26-24, and Kentucky in the fourth 26-24.

Claire Chaussee again coming through against Kentucky for Louisville. She had 19 last season against the Wildcats, following it up with 16 kills and two blocks this time around. Anna DeBeer would be credited with 15 kills, four blocks and an ace. Amaya Tillman with 11 kills and three blocks. Aiko Jones with eight kills and two blocks.

More evidence that records don’t matter much in games with arch rivals, Louisville improving its record to 8-1 and UK slipping to 5-3. UofL travels to the West Coast Saturday for a match against Stanford at 10 p.m.