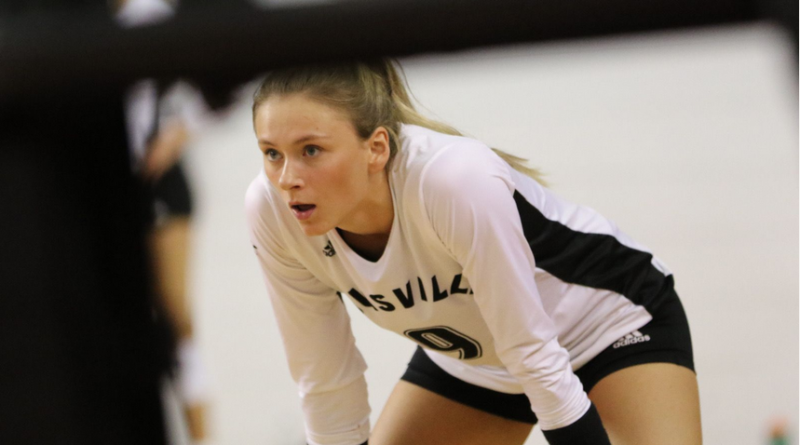 Claire Chaussee always emerges when the University of Louisville volleyball team needs someone to deliver a key hit. Shocking sometimes how hard she smashes the volleyball over, around and through opposing blockers.

That sense of elation, punctuated by an infectious smile and combined with her six years of experience, makes her one of the leaders on a UofL team. She’s been playing volleyball since she was 10 years old, mastering that killer instinct to perfection.

Wide-eyed opposing blockers often have a hard time concealing their shock at her amazing strength and technique.

UofL this week is ranked second in the nation by the American Volleyball Coaches Association (AVCA). The Cardinals, 9-1, are ranked behind only undefeated Texas (9-0) among the country’s best.

Chaussee, a 6-foot-1 graduate student from Sun Prairie, Wisconsin, and an outside hitter, received prestigious honors as the the National AVCA Player of the Week and the ACC Player of the Week after wins against ninth-ranked Stanford and 13th ranked Kentucky.

She had 16 kills hitting .371, six digs, and two blocks against the Wildcats in a five-set thriller. She followed that performance with 19 kills hitting .310 and four digs against Stanford.

Chaussee has 113 kills through 10 matches and is hitting an impressive .310 on the season. Not that she’s counting kills but Louisville is counting heavily on her to keep doing what she does best — pounding the ball into the collective face of opposing defenders.

2 thoughts on “Louisville’s Claire Chaussee best in the nation”