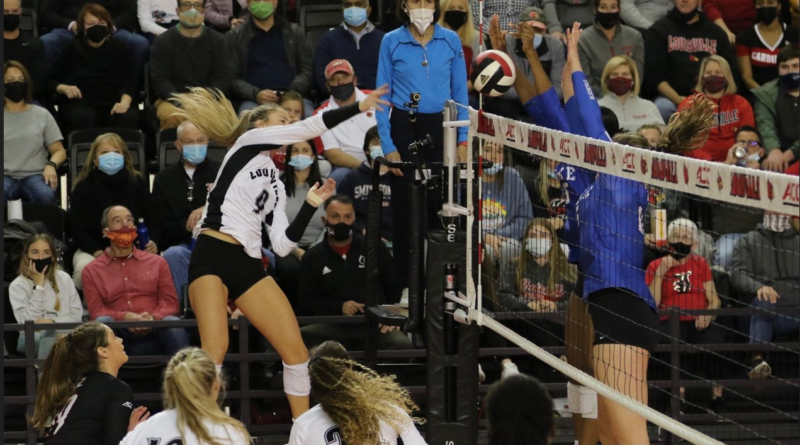 Claire Chaussee goes up for another kill against Duke one of seven for the night (Mike DeZarn photo).
Women's Basketball
Charlie Springer 1 min read

Lots of really great players on the University of Louisville volleyball team. They provided ample evidence of it again Friday night in a 3-0 sweep of Duke in improving their record to 16-0 in the Atlantic Coast Conference and 26-0 against all competition. Scores of 25-12, 25-16 and 25-15.

The stars and future stars list could go on and on. But the player opposing teams often overlook and have problems handling has to be Claire Chaussee who makes life miserable for them. While listed as a six footer, she seems smaller on the court. Blessed with an  angelic countenance of a player just happy to be in the game, she plays with an intensity to be envied. Her most surprising attribute, however, is the ability to swat the volleyball with power, often shocking the fans and the players on the other side of the net.

Same story Friday night, Chaussee making significant contributions with seven kills and two blocks. In her player bio, she says the place she want to visit is “Punta Cana to swim with the sharks and sting rays.” Not surprising for anyone who has seen play for this UofL volleyball team.