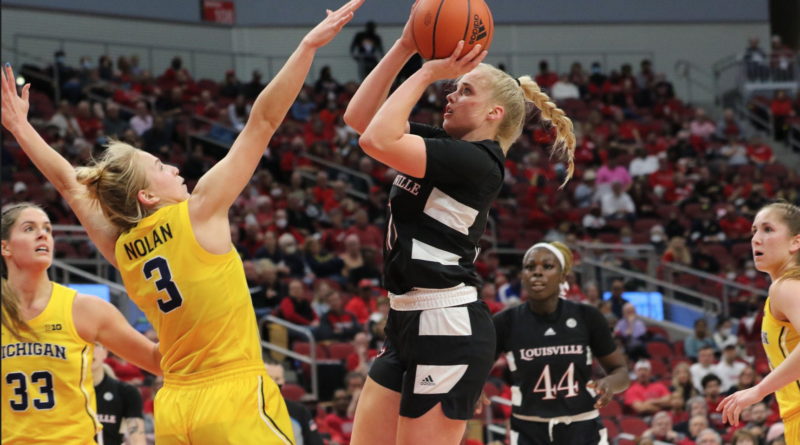 Michigan looking for an easy win, entering the game with a 7-0 record and a lofty No. 9 ranking in the polls. The Wolverines were unprepared for the defense that at awaited.

Not tonight, not in our house, say members of the University of Louisville women’s basketball team. The Cardinals falling behind 7-2 early before reeling off 13 unanswered points, including two straight 3’s by Kianna Smith.  The game was all over with UofL owning a 39-15 lead at the half. UofL won the game 70-48 before a crowd of 7,309 at the KFC Yum! Center.

— Emily Engstler, the transfer from Syracuse, turning another impressive performance. Her 18 points and 14 rebounds were tops in those stat categories for both teams. She could not have chosen a better team to enhance her considerable skills. Engstler made eight of 15 from the field and two of four from 3-point range in posting her second double-double this season. Equally impressive she had five steals for the aggressive UofL defense.

”Coach specifically said before this game not to let little things bother us and to make sure that if something goes wrong, we keep our heads up,” Engstler said. ”I think that we just took it to heart and it’s something that I’ve been personally working on.”

— Kianna Smith, embracing her enhanced leadership role, with 17 points. She made four of eight 3-point attempts and 6 of 13 overall, putting her in double figures for the fifth consecutive game.

— Hailey Van Lith, also a force on defense with three steals, may be finding her range on offense. She had two 3-pointers, her second and third for the season, and contributed a total of 10 points. Just a matter of time, ready to erupt any game now.

Louisville not only controlled the boards 39-26, it scored 32 points off turnovers and 16 second-chance points against a Michigan squad holding opponents to 35% shooting and 52 points per game. Shaking off those early miscues in the Cardinals’ return home after a three-game West coast swing to completely dominate another top 10 team.