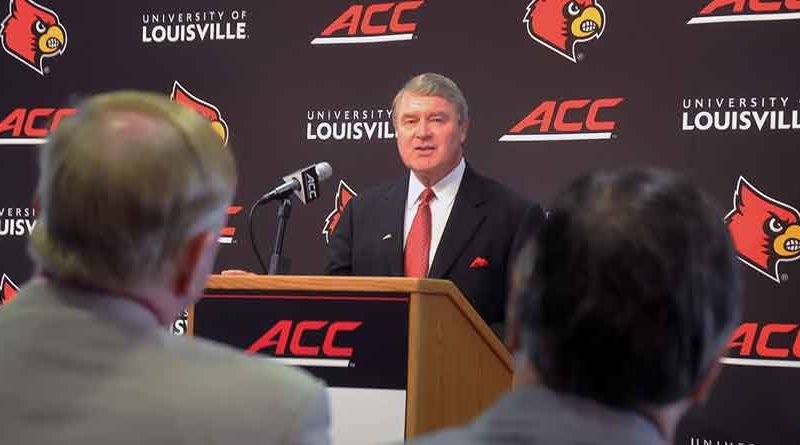 John Swofford was front and center on one of the biggest days in University of Louisville history. He was, in fact, the individual, who as Commissioner, officially welcomed UofL into the Atlantic Coast Conference. The best of times for Louisville supporters and fans.

Jim Ramsey, former UofL President, and Tom Jurich, former VP of Athletics, overseeing the ceremony at Howard Schnellenberger Complex at Cardinal Stadium. Ramsey and Jurich seated in the front row, having navigated Louisville into the ranks of the big boys, finally into a Power Five Conference. A moment to be savored, a major milestone for the university, followed by community celebration of hundreds at Fourth Street Live downtown.

Louisville fans will always remember him as the individual who welcomed UofL into the conference.

“Today has been a long time in the making, and I’m pleased to be here to officially welcome the University of Louisville as the newest member of the Atlantic Coast Conference,” said Swofford during the induction. “The University of Louisville and its athletic program continues to reach new heights and ranks among the nation’s most competitive, making it a perfect fit for the ACC.”

Those memories quickly flooding back after the news Thursday of Swofford’s planned retirement following the 1920-21 season. As the fourth commissioner of the ACC, Swofford guided the league to unprecedented stability, success and growth, expanding from nine to 15 members beginning with Miami and Virginia Tech in 2004, quickly followed by Boston College and later joined by Pitt, Syracuse, Notre Dame and Louisville.

Swofford’s impact has been felt far beyond the ACC footprint. He played a key role in the evolution of the College Football Playoff, as well as being a leading advocate for NCAA legislation that allows Power 5 conferences to better address the needs of their institutions, athletic programs and student-athletes.

In 1980, at the age of 31, Swofford was named the athletics director at the University of North Carolina, his alma mater. He held that post for 17 years. As athletics director, Swofford’s teams won more ACC and NCAA championships than any other athletic director in ACC history, a record that still stands. In 1994, Carolina won the Sears Director’s Cup, awarded to the top overall athletics program in the nation, the only ACC program to ever win that award.

Louisville fans will always remember him as the individual who welcomed UofL into the conference. “The success and growth of the UofL athletic department was pretty obvious,” said Swofford that day. “What the University has accomplished over the past decade and a half is quite remarkable. The selection of UofL as the newest conference member was unanimous.”

One thought on “Louisville relishes Swofford’s role in ACC milestone”