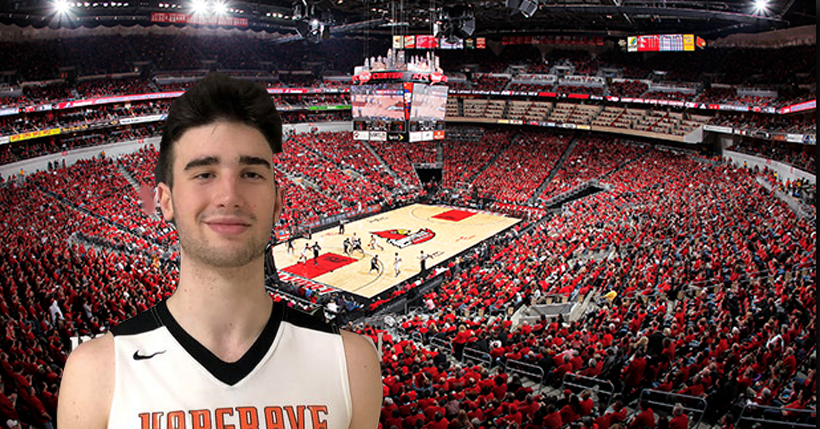 Too many times over the years one has marveled at how some players wound up playing center at the University of Louisville. Not naming names but far too often big guys who never mastered the art of hook shots, layups, even a basic dunk. No reflection on the current roster and few Louisville fans would disagree.

That won’t be the case with UofL’s latest commitment. Namely Gabe Wiznitzer, a 6-foot-11, 240-pound center from Hargrave Military Academy in Virginia, who told Coach Chris Mack today that he is coming to Louisville. Coming next season, after reclassifying from the 2021 recruiting class to the 2020 class.

A quick check of a highlight reel over on YouTube will confirm that Wiznitzer knows exactly what to do when he sees daylight on the offensive end. None of the awkwardness, hesitation of uncertainty seen all too often. He will also be a force on defense, with natural instincts. Not necessarily a future All-American, but he is destined to be a contributor, leaving a mark at UofL.

“I chose Louisville and coach [Chris] Mack because he has an in-depth plan for me and my development,” Wiznitzer told 247sports. “I’ll be with their strength coach everyday and practicing against some of the best bigs in the country every day too.”

Indicative of his desire to play at Louisville is his willingness to redshirt during his first season.  “I just think going 2020 and redshirting will allow me to be the most ready I can be whenever I am able to play,” he added. “Overall it’s just a great situation and I have a lot of trust in the coaching staff.”

Wiznitzer chose UofL over schools such as Ohio State, Iowa, Xavier, Iona, Virginia Tech, Providence and Cincinnati, among others.