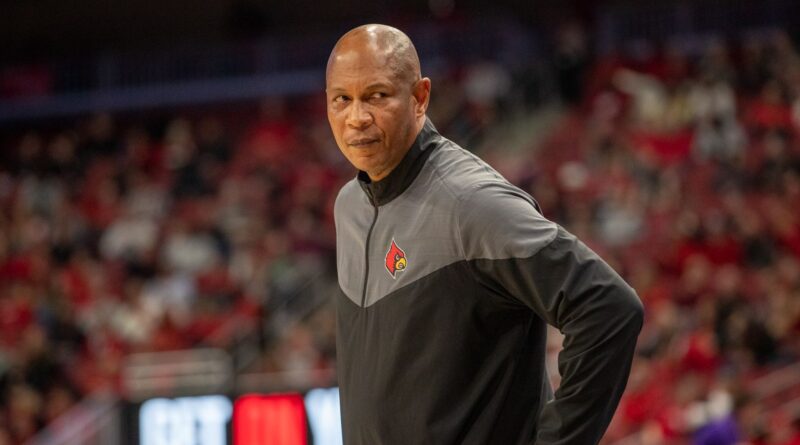 The blank stares, the inexplicable plays, the lack of emotion or purpose.

It’s going sound repetitive. All of the thing this University of Louisville basketball team does poorly happen again and again. This team does nothing well. Every time it made a move Tuesday night against Lipscomb, it would regress.

Louisville’s two-game win streak is gone as the Bisons (8-5) easily handled the Cardinals 75-67 in front of a crowd of 11,861 at the KFC Yum! Center. Fans watched this team throw bad passes, play soft on defense, lose or forget who they are guarding.  The Lipscomb offense scored just anytime it wanted.

UofL attempted 55 field goals, missed 32 of them. The visitors chalked up 18 points from 10 Louisville turnovers and were out rebounded the Cards 40-26. El Ellis had 24 points but five turnovers. Sidney Curry added 12 points and seven rebounds.  J.J. Traynor had eight points and three rebounds off the bench. Kamari Lands was one of five from field.

“When they dominate you on the boards and shoot 52 percent the second half, how do you win that game?” asked coach Kenny Payne. “We never imposed our will. We knew if we allowed it to be an offensive game we couldn’t win.”

Lipscomb continuously used back cuts to get layups. The Cards were more athletic but sure didn’t look like it. “They were tougher. They were the aggressor. More disciplined,” said Payne.

“El was the only one attacking the lane. Probably the only kid out there fighting regardless of making mistakes,” said Payne. “We have to address rebounding, toughness, playing basketball when you are tired. In the huddle I’m saying the great teams are going to do what ever it takes they need to win.”

The message didn’t resonate. Louisville got within four points late in the second half, 71-67, but Ellis lost the ball and and Lipscomb’s Derrin Boyd got an easy layup. Louisville went the final 3:19 without scoring.

“We had some casual moments,” said Withers about practice leading up to this game. “We lost our focus when the game got close. We have to be locked in and focused.”

This team is not close to average. This team recoiled within itself after beating Western Kentucky. They did beat Florida A&M but looked disorganized doing so. The schedule doesn’t get any easier with the beginning of Atlantic Coast Conference play.

A visit to North Carolina State, Thursday; is next followed by the Christmas break before a New Year’s Eve game at Kentucky. How bad can this team really get to be?  We haven’t see anything yet.

One thought on “Louisville basketball gets worse if that’s possible”