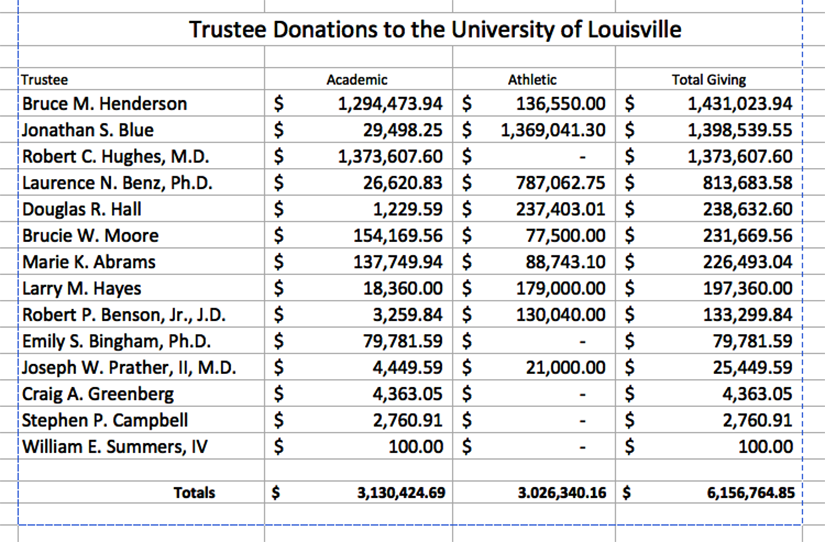 Anyone who thought the drama was over with the University of Louisville board of trustees got a rude awakening from Governor Matt Bevin the other day. He is more adamant than ever that current board will be replaced.

“They will be gone soon enough,” the Governor told Terry Meiners on WHAS Radio. “The governance of that university deserves people that are focused on the university and not their own agendas.”

Voters handed full control of both houses of the Kentucky General Assembly to the Republican Party. He says he wants people “who aren’t doing this (serving on the UofL board) for anything other than the right reasons.”

One way of assessing the level of trustee commitment to the University is by examining their financial support. Because the motives of some members has been questioned, UofLCardGame submitted an open records request to the University for the lifetime contributions.

While some might argue that making public the private donations of individuals to educational institutions should be out of bounds, we believe it is important to follow the money in this case.

There is a wide variance in trustee giving from top to bottom. Some members giving more to athletics than academics, and vice versa. Some giving millions of dollars, and a few notable members nowhere close to being overly generous, given their financial resources.

Bruce Henderson, owner of Henderson Electric, is the leading contributor, having donated in excess of $1.4 million to UofL, the bulk of it, $1.3 million, for academics and another $126,550 for athletics.

Jonathan Blue, chairman of Blue Equity, comes in second, with total contributions of $1.398 million.  His contributions are weighted in favor of athletics, more than $1.36 million for sports, and $29.4 thousand for academics.

Bob Hughes, immediate past Chairman of the Board of Trustees and a Murray physician, is the third leading contributor, having given $1.37 million to academics, most of it derived from the contribution of his 7,700-square-foot house in Murray to UofL.

Current Trustee Chairman Larry Benz, who is chief executive of Confluent Health, has contributed $787 thousand to athletics and $26.6 thousand to academics, adding up to a grand total of $813,683 in lifetime gifts.

Near the bottom of the list of UofL contributors are some frequent critics of former UofL President Jim Ramsey who have also argued that the UofL Foundation should be placed under the auspices of the Board of Trustees.

Craig Greenberg, an attorney and chief executive of 21C hotels, had donated only $4,363 to the University through Oct. 4 of this year. Campbell, an advisor at Lazard Freres & Co., had given $2,760. Both contributed only to UofL academic programs.

“Their contributions to the school don’t match the noise they’ve made over the past couple of years,” said one board member.

Emily Bingham, who has sided with Greenberg and Campbell on numerous issues, has donated more than $79 thousand to UofL, all of it for academic purposes.

Interestingly, Larry Hayes, former chairman of the Louisville Arena Authority and administrator under former Louisville Metro Mayor Jerry Abramson, has donated a total of $197,360, including almost $180,000 for athletics.

One thought on “Some generous givers, a few not so much, on UofL Board of Trustees”