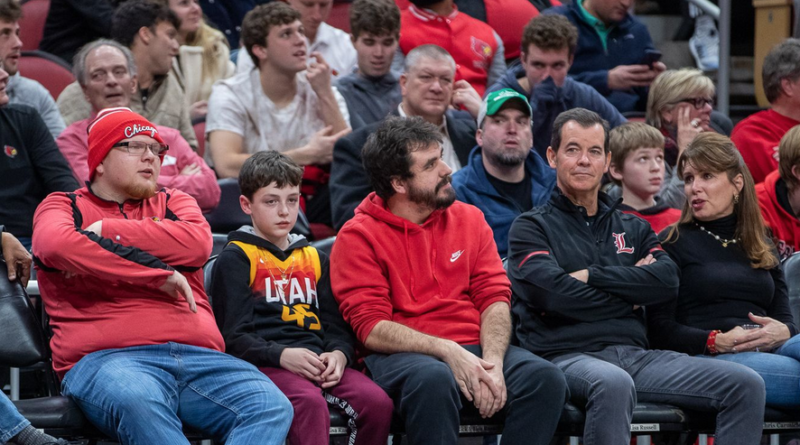 The people occupying the luxury seats on the court were not ecstatic (Mike DeZarn photo).
Basketball
Charlie Springer 3 min read

Is Sydney Curry part of the answer? Stay tuned.

Waiting, waiting for a spark, any signs of life in the University of Louisville men’s basketball program. Frustrated fans looking for someone, anyone, to rise above the drone of mediocrity, to provide leadership, to provide reason, any reason, to believe things will get better this season.

Another one of those games, one more inexplicable loss to an otherwise mediocre opponent. Louisville losing to North Carolina State 79-63 Wednesday in front of 11,973 fans at the KFC Yum! Center.

This long-time Observer sensing a continued decline in UofL basketball if things continue on the current trajectory. A lack of leadership, combined with a weak mix of shooting skills, basketball I.Q., and overall ability, giving fans little hope for much success during the 2021-22 season.

A team that leans heavily on six transfers from other schools, unable to develop the necessary chemistry, unable to inspire confidence in themselves, or among the coaches and the fans. Unable to take advantage of opposition mistakes, lapsing in long scoring droughts, lacking in defensive skills, for that matter basic basketball I.Q. levels.  Unable to make the most basic basketball shots or moves at times.

A team with five starters that could only collect 11 points the entire game. Malik Williams, who led the team in scoring with 10.5 points coming into the affair, managing only four points for a second straight game. Samuell Williamson with zero points, Matt Cross and Jarrod West with two points each, and El Ellis with three points. A combination of great NC State scouting or UofL ineptness, take your pick. Not making progress with the first five, seemingly going in reverse the last couple of games.

“I don’t know what I’m getting when I put a player in. Usually when you put a guy in, you know what he’s gonna bring to the table. To have three starters out of the five with zero points (in the first half), to be outscored 31-6 by the starting five, only then to go out and get down 8-0 in the second half — I mean, I have no explanation.”

One has to wonder what’s really going on with all of the uninspired play. Maybe it has to do with Mack missing the first six games, with the assistants guiding the Cardinals to a 5-1 record during his absence. Challenging enough under normal circumstances, made more difficult with so many transfers. This team possibly gaining some temporary chemistry, only to have it interrupted with return of the coach. Back to the drawing board all over again.

Back to Sydney Curry, one person Coach Mack should be able to count on.  For the first time in a while, Louisville may have found a player who can play like a bona fide big man.  Curry is a 6-foot-8 junior transfer from Logan Community College in Carterville, Illinois. Someone with muscle and bulk, someone who has no problem mixing it up, is willing and able to get physical, welcomes it, thrives on it. Someone with the ability to absorb contact and follow through at the basket. In 25 minutes against NC State, he would lead all Louisville scorers with 22 points while pulling down 10 rebounds.

If he can play like he did for 22 minutes against the Wolf Pack, there may be some hope for this UofL team. But first the coaching staff needs to determine whether he’s a better choice at the five spot than Malik Williams. It’s pretty obvious, even to casual observers, that Curry is more of a force than Williams in the middle. All too often Williams avoids the congestion beneath the basket, out muscled more often than not against his counterparts. He seems to prefer positioning himself outside the 3-point line, cranking up too many from long distance. Sometimes even bringing the basketball down court while being turnover prone. He leads the team in turnovers after 16 games.

The question may be whether the coaching staff has the will to relegate Williams to a backup role. Williamson has been with the team for five years and Mack may have a sense of loyalty to him. Mack may not have a choice. Something has to change, and it has to change soon.