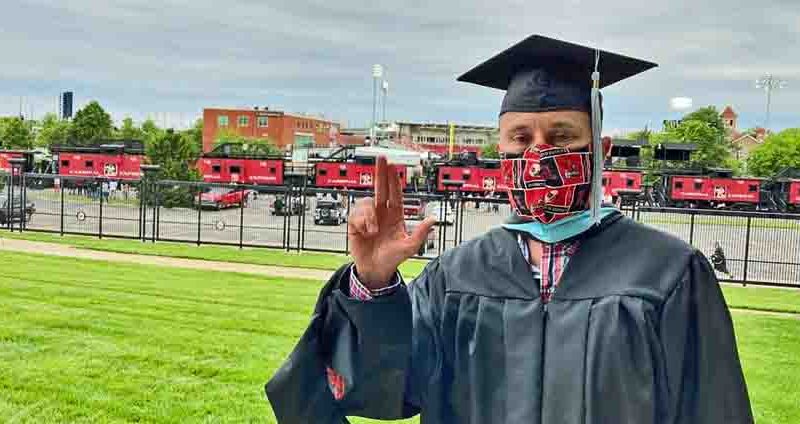 Point of personal privilege for the Observer to salute son Steve Springer.

Steve receiving his Master’s degree from the University of Louisville during commencement ceremonies. A long time coming but worth the wait, officially now a member of the UofL alumni family. A dozen or so years after earning his Bachelor’s degree at Murray State University. Both huge deals for a guy also known as RacerCard in some fan circles.

Lots of Louisville fans out there, but few with the level of commitment as Steve. He actually has the credentials to prove it, having been selected as the Biggest Fan of the Big East in 2011, beating out contestants in 15 other cities.  Beat out his closest competitor by 64,458 votes in fan balloting, winning a 2011 Volvo, a $10,000 contribution to UofL, and a trip to the Big East Tournament at Madison Square Garden.

The second man in the family to earn a Master’s from UofL. But Steve has the distinction of actually being the only member of the family to have been born in Louisville. The primary motivation for each of these guys largely getting a degree with the University of Louisville brand, with strong encouragement from spouses Barbara Springer and Casey Springer, respectively.

Not easy, not with a full time teaching job, a part time sports writing stint, a family of six and a daily commute. Getting that Master’s degree in Education, specifically Instructional Technology. Long hours, late hours, getting it done between all the other responsibilities. Commitment, dedication, nothing less.

The Observer picking up his degree during commencements ceremonies at Freedom Hall in 1978. Steve getting his recognition on Saturday at Cardinal Stadium.  Thanks for understanding why a father could not be more proud.

One thought on “Another UofL degree in the family”