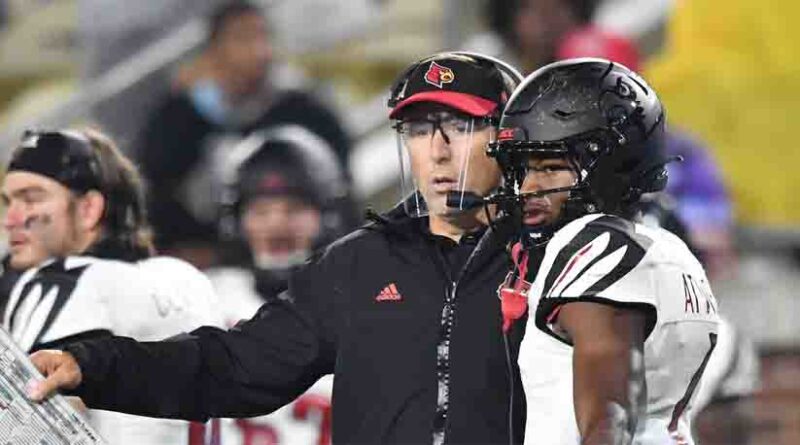 Let’s cut right to the chase. University of Louisville football will be under the microscope this coming academic year.

Coach Scott Satterfield has revamped his coaching staff after some scattered to other schools. Satterfield himself even flirted with South Carolina’s head coaching position. Card Nation has been down that road way too many times.

Satterfield is 11-12 in two seasons as the Cardinals head man. Do I hold a grudge against him? No. But with his third recruiting class in place and no Covid to interrupt, its time to get the Cards moving into at least the conversation about finishing in the upper echelon of the Atlantic Coast Conference. Is Louisville going beat Clemson next season.? Nope. The Tigers aren’t rebuilding, they just reload. Check Alabama and the Southeastern Conference.

If Louisville want to be the football program Athletic Director Vince Tyra and President Nelli Benapedai wants it to be,  Satterfield must start with getting recruits to stay in The Ville, rather than packing their books for Kentucky, Purdue, Indiana, Ohio State or Notre Dame. I can go on and on about state and local recruits that are Wildcats or Hoosiers or Fighting Irish. It’s an age old problem. But let’s not live in the past.

The football schedule is manageable including the opener in Atlanta against Old Miss and its so-called mastermind coach Lane Kiffin. Eastern Kentucky and Central Florida could set the tone for a nice run in the Atlantic Coast Conference. The toughest road games are at Florida State, North Carolina State and Duke. The Blue Devils are always well coached.

The ACC home schedule includes Clemson, Virginia, Boston College and Syracuse. Then finish with Kentucky. It’s time to send the Wildcats back up I-64 with a loss.

Cut down on the unforced turnovers and a better year from quarterback Malik Cunningham will go a long way towards improvement.
The defense should be solid with several retuning bodies. Depth will be tested in all areas with injuries.

As for men’s basketball Chris Mack revamped everything from his coaching staff to his roster. David Johnson is gone. Karlik Jones has proven all he can do at the college level.

A strong season is badly needed from Malik Williams, free of  those recurring injuries. Sam Williamson needs to continue the upswing in his game. Dre Davis likewise, needing to resemble the son of a coach that he is. The Cards have some good veterans but newcomers will figure heavily on this team. Little is know about these guys except for the chattering on social media.

The basketball team needs to at least get past the first weekend of the NCAA Tournament to restore some luster in the program, sorely missing since “Pitino Gate.” But that’s another post.