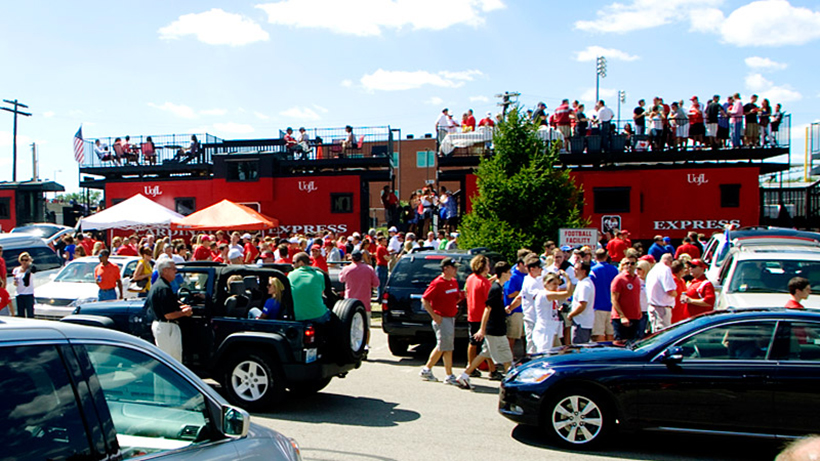 Tailgating is synonymous with University of Louisville football. Many fans are nervously awaiting the fate of their social calendars.

Tailgating is for some UofL fans almost as popular as the football games. The pre-game partying has, in fact, played a significant role in making UofL football a major player on the national scene.

There was no tailgating at Louisville when Bill Olsen, a former UofL basketball and baseball player, became Athletic Director in 1980. Olsen, as an assistant coach to Denny Crum, had been on the bench in Indianapolis when the Cardinals won the program’s first NCAA basketball championship in 1980.

The football program was hanging by a thread, drawing only about 15,000 fans per game. The program was actually a target of some members of the university administration, some prominent members saying it needed to go. Olsen vigorously defended the program while it continued to struggle on the field.

Olsen would do two things that would forever change the outlook for UofL football. The first was to introduce the concept of tailgating at games. The second was to hire Howard Schnellenberger as head football coach in 1983, leading the Cards to wins over Alabama in the Fiesta Bowl and Michigan State in the Liberty Bowl.

The early popularity of tailgating may have encouraged Olsen to go after Schnellenberger. The concept was immediately successful after being introduced in 1980. So popular that people continued to party well into the first and second quarters of the games.

Olsen told Card Game that Tommy Carroll, former president of the University of Louisville Associates, was a strong advocate of tailgating, knowing how popular it was at football schools in the south. Olsen contacted Charlie Herd and myself at the Louisville Area Chamber of Commerce and a football marketing committee was created. Among the members were Maury Buchart, then Vice President of Marketing at the Courier-Journal, Bob Goetz, also of the CJ, and Mike Brown, of Pepsi-Cola.

“The marketing committee suggested that we start promoting the tailgating concept, making them social events as well,” said Olsen. “The concept was thriving at many other schools but we had just never done it.”

The committee urged Chamber businesses to get involved. Among them was WHAS Radio, which promoted the concept of 84-for-84 (840 is station channel). Wayne Perkey, Milton Metz and other station celebrities manned a tailgating area, selling sandwiches and cold drinks for 84 cents.

U of L also encouraged the cheerleaders and Lady Birds to mingle with crowd and got the band to march through the crowd around old Fairgrounds Stadium. Many groups of friends and families quickly gravitated to the idea of food fests, and it ballooned from there.

Schnellenberger raised the idea of UofL having its own football stadium, and that was all the encouragement Olsen needed. When he retired in 1997, a new Cardinal Stadium, with 42,000 seats had been completed, and average attendance had grown to almost 30,000 fans per game.

The all-time single-game attendance record was 58,187 for the UofL-Notre Dame game last season. Never underestimate the role of tailgating in the continued growth and popularity of Louisville football.