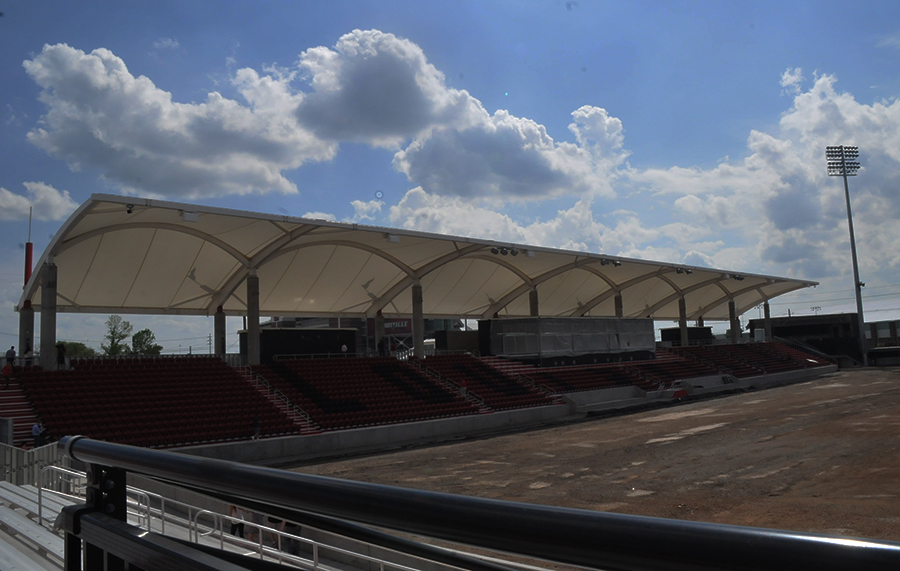 If you thought the winter of 2013-14 was tough, consider the challenges for the Abel Construction workers in completing the new Dr. Mark & Cindy Lynn Soccer Stadium at the University of Louisville.

All the snow was taking a toll on the construction schedule, pushing the projected opening completion up until around August 29. That just happens to be opening day for both the men’s and women’s teams. Whether they will have time to practice on the new field before their first games is a real question mark.

The men’s team opens the season against Maryland at 8 o’clock that night, following the women’s game against Mississippi at 6 p.m.

But coaches Ken Lolla and Karen Ferguson-Days are ecstatic as they anticipate the new stadium and their first seasons in the Atlantic Coast Conference.

“My heart always beats a little faster when I drive past the stadium,” said Lolla. “It’s going to be the best collegiate soccer stadium in all America.”

Both coaches say the new stadium and conference affiliation are creating a national buzz about UofL soccer, including a boost in recruiting. “It’s an amazing situation for Louisville soccer,” says Lolla.

The men will host ACC foes Duke, Syracuse, Pittsburgh and Clemson, along with Indiana and Ohio State. The women host Syracuse, NC State, Boston College, Virginia and Virginia Tech, along with Kentucky and Mississippi.