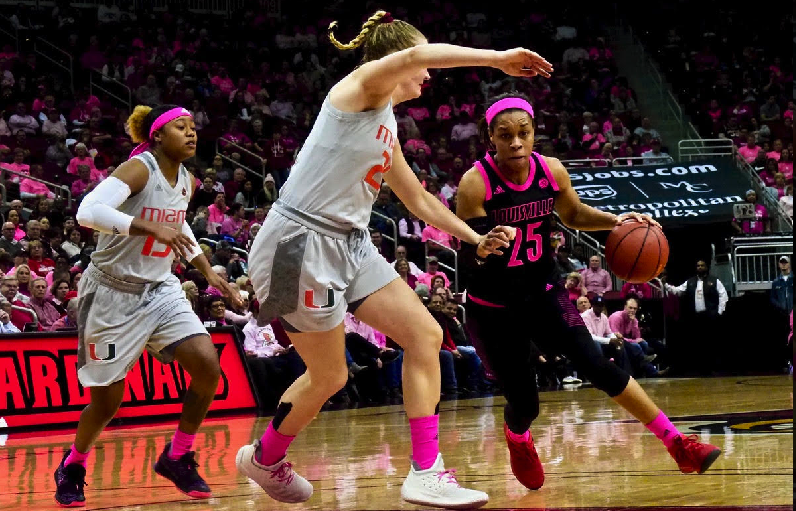 Any questions about whether the Miami women’s basketball team’s recent win over Notre Dame was a fluke were answered on Sunday. Unfortunately for 12,193 University of Louisville fans at the KFC Yum! Center, the Hurricanes are very much for real.

Just ask Sam Fuehring who had the unenviable task of guarding Miami’s Emese Hof under the basket. Fuehring would quickly collect two fouls in the first quarter and play only six minutes in the first half.

Hof, a 6-foot-4 senior from the Netherlands, is the prototype center in women’s basketball, probably 180 pounds, powerful and quick. She was making it look too easy, connecting on 10 of 16 field goal attempts, most of them layups.

Hof would wind up with a game high 25 points, seven rebounds, five assists and three steals. Fuehring, meanwhile, struggling against the hefty Hof, making only three of 10 shots for only six points and six rebounds in 26 minutes.

Wearing a broad smile during that last minute, knowing her team had Louisville’s number this day. Hurricane Sports describing Miami’s win over second-ranked UofL as “the biggest regular season win in program history.”

Equally impressive in her own right was Miami point guard Laura Cornelius,   a 5-foot-8 point guard, also from the Netherlands. She would wind up with 16 points and five assists.

And there goes that No. 2 rating, putting UofL in a three-way tie for first place (with Miami and Notre Dame) in the ACC, and forcing a reassessment of the top four seeds in the NCAA tournament. New ballgame for the UofL women.

Asia Durr led UofL in scoring but she would admit it was not one of her better games. Par for the course against Miami.

In fact, the first bullet point on the Miami media fact sheet was that the Hurricanes had held Durr to a mere seven points in last year’s 10-point home loss to Louisville. Durr made only one field goal, with the rest of her points coming from the free throw line.

Asia was more productive on Sunday, scoring 16 points. However, she made only one of 10 three-point attempts, and five of 17 overall.