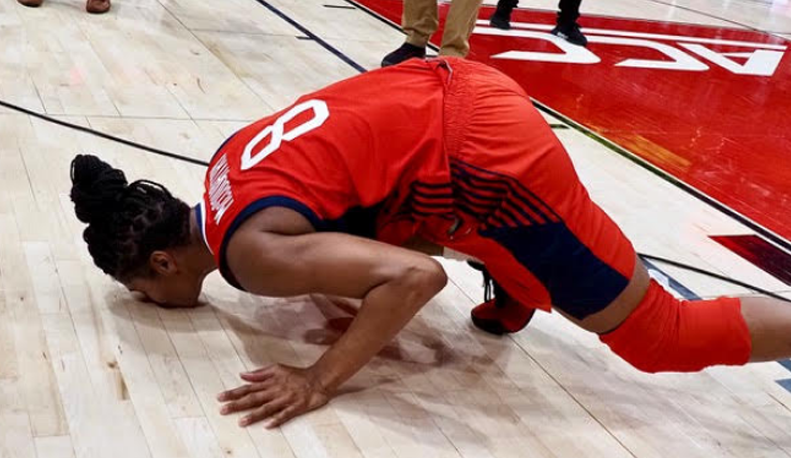 Almost 10 years after she was the No. 1 draft pick of the WNBA’s Atlanta Dream, Angel McCoughtry returned as a contender for a Team USA position against her former University of Louisville basketball team on Sunday.

An important game for numerous reasons for McCoughtry, including the fact that she had led the Cardinals to their first NCAA Final Four appearance during her senior year. But there’s more at stake this year because she is seeking a comeback after injuring a knee in 2018 season. She did not see any action during the 2019 season.

Louisville still occupies a strong place in McCoughtry’s heart. She left to a standing ovation from the crowd of 12,008 after scoring 11 points in 21 minutes, kneeling to plant a kiss on the KFC Yum! Center floor. Far from certain that she will make the Olympic team but McCoughtry was ecstatic playing against her old team.

“What a great experience. The arena was full of people, and that just shows you how far we’ve come,” said McCoughtry. “Louisville looks great and I expect them to go deep in the tournament. They play so fast and I think that’s why they beat a lot of teams.”‘

The Cardinals scored 10 unanswered points midway through the opening quarter and a jumper by Mykasa Robinson put them up 19-13.  Far too much talent on the WNBA squad, however, catching up in the second quarter and putting the game out of reach in the third quarter. Final score: Team USA 97, Louisville 54.

Jazmine Jones finished with 12 points for UofL on 4-9 shooting, while Dana Evans had  10 points and six assists .

A timely learning experience for the Cardinals who are 21-1 overall and 10-0 in the ACC.  The beating a reminder that the UofL women had much room to improve as they prepare for a showdown against Florida State (18-4, 7-4) on Thursday at the Yum! Center.

One thought on “McCoughtry continues comeback against her old team”