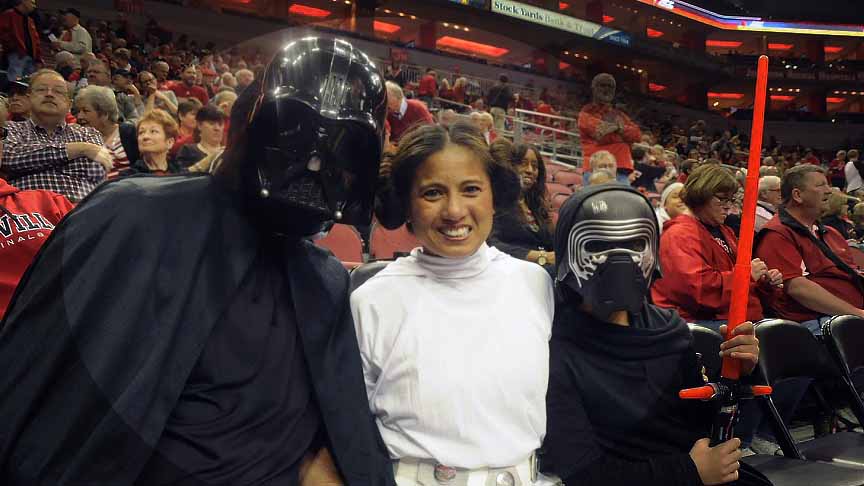 Darth Vadar, Princess Leia and Kylo Ren, aka Mike, Theresa and Aspen Schmidt, were among the 11,641 fans watching the Louisville women demolish Pittsburgh on Star Wars Day at the KFC Yum! Center.

Characters from the seven different Star Wars movies arrived Sunday at the KFC Yum! Center to see the UofL women conclude the regular season, Darth Vadar was everywhere it seemed, usually in the company of Princess Leia, or Yoda. Boba Fet here, Chewbacca there, Yoda here, and Storm Troopers everywhere. The visiting Pittsburgh women never had a chance, The Force so prominent, so pervasive, so obviously leaning UofL’s way.

Leading the charge again was Myisha Hines-Allen, scoring nine of Louisville’s first 10 points after tipoff. She would score 13 points in the first quarter, going on to achieve her ninth double-double of the season and 10th of her career, with 25 points on 11-of-14 shooting and 13 rebounds.

“We had a lot of energy coming out,” said sophomore Myisha Hines-Allen, in a possible thinly-veiled reference to The Force. Whatever, Hines-Allen has been imposing her will on ACC opponents with regularity of late. 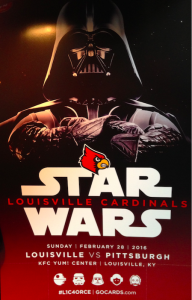 Briahanna Jackson continuing to feel The Force as well, an inexhaustible source of energy, the player nobody wants defending them. No breathing while she’s around. She’s a marvel to watch around the basket, sometimes getting ahead of herself but always entertaining to watch. Notching 12 points, three rebounds and four assists.

Taja Cole coming around, notching six points and five assists in this one.

Courtnee Walson left midway in the first quarter and didn’t return after injuring a pinky finger. She should be ready to go again in the ACC Tournament.

The second-seeded Cardinals will play at 6 p.m. on Friday against the winner of No. 7-seed Georgia Tech and No. 10 Wake Forest/No. 15 Clemson.

This is the default gallery type template, located in:
/home/uoflspr0/public_html/wp-content/plugins/nextgen-gallery/products/photocrati_nextgen/modules/nextgen_gallery_display/templates/index.php.

If you're seeing this, it's because the gallery type you selected has not provided a template of it's own.