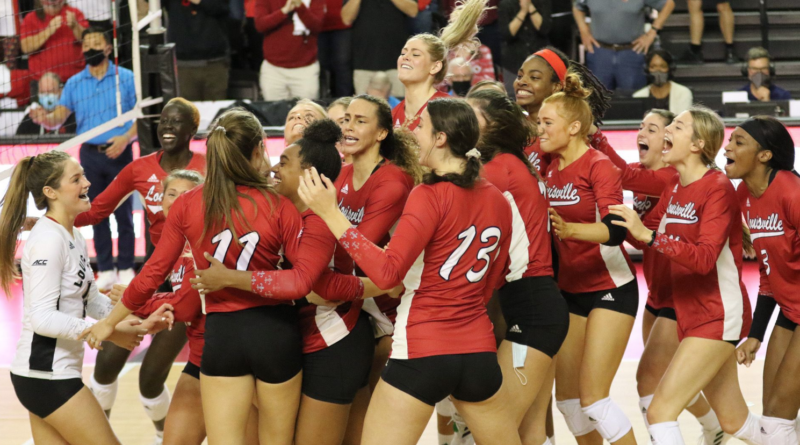 The volleyball match up of the year occurred Sunday at the L&N Arena on Belknap Campus. It was, in fact, the biggest volleyball game in Atlantic Coast Conference history, featuring two teams ranked among the top four in the nation. The University of Louisville volleyball team ranked No. 2, Pittsburgh at No. 4. What followed was a game that met and exceeded all expectations.

This Cardinal volleyball team endearing itself to the fan base, carving a special place in the hearts of folks who love UofL athletics. Providing a reason for fans to dream big dreams for another Louisville team. A special UofL team with some much, much bigger aspirations.

The tension was palpable from beginning to end, so much hanging on every jump serve, every block, every dig. Each taking on added importance, accompanied by roars of approvals or sighs of anguish. UofL getting off to a slow start, obvious that up-set minded Pittsburgh pumped on adrenaline, winning the first set 25-19. An intimidating start for the Panthers. Were the Cardinals for real or what?

Louisville would quickly answer that question, erupting to a 16-6 lead in the second set before the Panthers knew what hit them. Multiple kills by Claire Chaussee and Amaya Tillman creating bursts of momentum until Pittsburgh recovers and is able to cut the final margin to five points. UofL would win the next set 27-25, Pitt the fourth 25-22, setting up the dramatic climactic fifth set.

The Panthers were only able to build a lead of two points early 8-6. The Cardinals emerged from a media timeout with a 4-0 scoring run for a 10-9 advantage. An Anna DeBeer kill would give Louisville a 13-11 lead, but Pittsburgh would tie things up at 13-13.   The Cardinals would score the next two points on a kill and a block by Anna Stevenson with assists with Tori Dilfer.  Game over, Louisville wins, Pittsburgh loses.

Statistical honors going to DeBeer for her 17 kills and three blocks, Claire Chaussee with 17 kills, Stevenson with 13 kills, five blocks and two aces, and Amaya Tillman with 12 kills and eight blocks.

“With it being a historic match, the first top-five matchup in the conference and to have it deliver on the network and be everything that fans thought it would be, back-and-forth and some amazing plays was pretty special,” head coach Dani Busboom Kelly said. “We know we need to continue to get pushed and Pitt really exposed some of our weaknesses today, so that gives us a lot to build on moving forward for the rest of the conference and hopefully the postseason.”‘

The special season continues to unfold. Plenty of room left on the bandwagon.

Gracias — CardGame reader John Cunningham and his wife Sallie provided tickets to the Observer and Barbara for Friday’s volleyball game, a 3-0 sweep, against Virginia. While the Observer has press credentials, it’s always more fun to be able to take Barbara and be a fan. Thanks John and Sallie. Much appreciated.