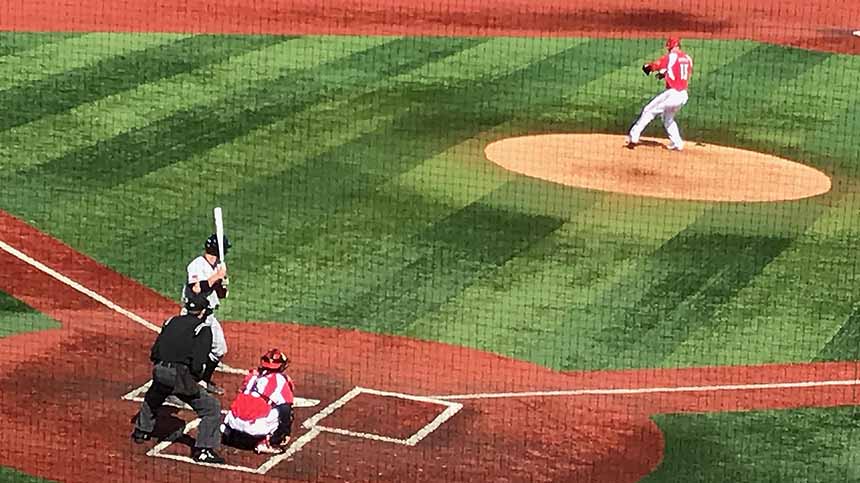 The reading on the temperature gauge indicating a chilly 28 degrees for Elementary School Day as the University of Louisville baseball team prepares for game two against Texas Tech.

The youngsters, in constant motion and seemingly unfazed by the cold weather, providing a noisy backdrop for a game between two highly-ranked teams.  But clearly not ideal conditions for pitchers, batters or other spectators.

Just ask Reid Detmers, a 6-2 left handed freshman pitcher for UofL, trying to fight off the frigid temperatures. He will walk two of the first three batters and give up a home run to the fifth, giving the visiting Red Raiders a 3-0 lead in the top of the first inning.

Not a good start, especially with UofL having lost in the opener of the two-game set. The Cardinals will battle back with Jake Snider slamming a triple and scoring on a sacrifice by Devin Mann. They will make up more ground with Josh Stowers collecting his first home run of the season in the fifth inning.

Louisville would push three runs across the plate in the sixth to take the lead, with contributions from Logan Wyatt, Tyler Fitzgerald, Pat Rumero, Tyler Fitzgerald and Snider. UofL would prevail by a score of 7-4, improving its overall record to 15-2.

Bobby Miller, a 6-2 right hander, would earn the win, taking the mound in the fifth inning, striking out five batters and allowing no Red Raiders to reach base in three-and-a-third innings.  It was the third win for the freshman from McHenry,Ill.

Junior right hander Sam Bordner would complete the shutdown with a perfect ninth inning, striking out all three batters for his seventh save of the season. Bordner has a scoreless streak of 21.0 innings dating back to last season.