For many University of Louisville football fans, Mario Urrutia is remembered as the 6-foot-6 wide receiver who stiff-armed his way into the end zone against Miami on a 56-yard pass play from Brian Brohm. 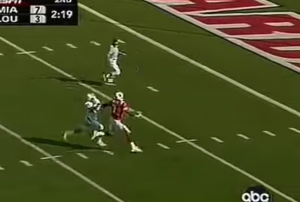 That memorable play from the 2006 season would give UofL a lead and the momentum in a 31-7 win over the visiting Hurricanes, the first win ever over Miami.

That was just one of many big plays for Urrutia who played in 34 career games for the Cardinals, recording 130 receptions for 2,271 yards and 16 touchdowns in his three seasons. He opted for the NFL draft his senior season, picked by the Cincinnati Bengals in the seventh round. He played on the Bengals’ practice squad before getting picked up by the Tampa Bay Buccaneers where he developed a career-ending case of turf toe.

Urrutia recalls thinking while driving home to Louisville, “What could I have done better to prepare myself for life after football,” he said. “I am not an 8 to 5 desk person so what can I do?”

Mario returned to school, receiving his college degree in communications in May from the University of Louisville. “I felt so good after graduating,” he said, noting that he had minored in marketing.

His dream has always been to help young people set and reach their goals, Mario said he had been careful with his money but needed to redirect his life. After some research, he learned he could start and secure a non-profit initiative and pursue his own objectives.

Mario has started Super Student Athletes (SSA), an organization designed to provide positive experiences for youngsters, involving neighborhood children in community service, doing good deeds, getting good grades in school, and learning how to set reachable goals. The group provided children with backpacks at the beginning of the school year.

SSA is located in a 10,000-square-foot building at 222 Eiler Avenue. Urrutia and friends are currently painting the house, putting in new floors and getting things organized. The group recently received a grant from Delta Dental.

Urrutia treasures his football memories from UofL, but now he wants to help some future generations fulfill their dreams, whether they be in sports, business or community service.

One thought on “Life beyond athletics for Mario Urrutia”