Hey you, the guy holding his nose. In case you haven’t noticed, women’s basketball has improved dramatically in recent seasons.

One thing fans of the University of Louisville team could almost count on a few years ago was that opposing players would often miss open layups as often as they hit them. It still happens, more than we would like for the Lady Cards, but there’s much more skill and finesse these days. 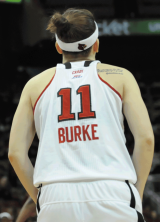 While watching the recent UofL-UConn game up close from a press table, I was amazed at just how physical game has become as well. Brutal at times.

Not too long ago, multiple fouls would have been called on almost every set under the basket. Not the kind of basketball you grandma played. She would have been laid up for a week after the opening game, fearful of ever getting back on the floor.

Shooting? Have you seen Becky Burke’s three-point shot? She recently hit eight of them, Shoni Schimmel six against a good Syracuse team. The line, 20.75 feet from the basket, is the same distance as the men’s game. Gotta be good to hit them, especially with someone waving their hand in your face. Try it some time.

We recognize that some fans, you know the ones, who eschew the women’s game as an inferior product. Their loss, maybe a good thing we don’t have to compete with them for tickets. But there a good reason the Lady Cards are averaging 10,000 fans per game, and it’s not just because of a new basketball facility and cheap ticket prices.

The U of L women play second-ranked Notre Dame at 2 p.m. Monday in a nationally-televised game. We don’t think the Lady Cards will be intimidated. If not, the game could be one of the best in women’s college basketball this season.

A good reason to leave work early. Work on that excuse.