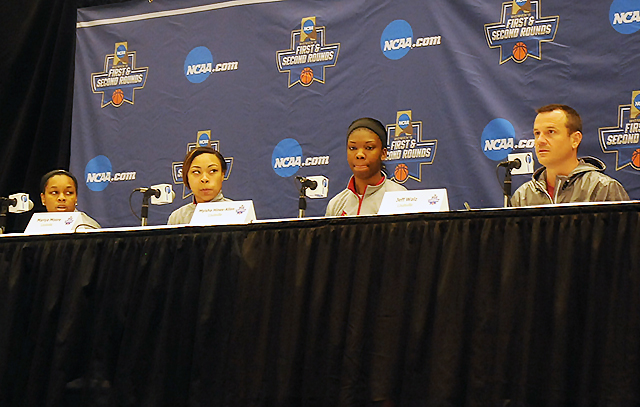 Jeff Walz was hit hard by the flu bug over the weekend, and he hasn’t been the same since. He coached the team from a balcony overlooking the court on Monday, not wanting to infect members of the University of Louisville women’s basketball team.

He intended to coach them on Tuesday, getting out of his sick bed, hopping in his car to go to practice. “I got halfway there and had to pull over to the side of the road and go back home,” he said, without providing graphic details.  “I’m not 100% now but I’m feeling better, probably 80%. I should be okay by Friday.” He was seated at a table at an NCAA press conference Thursday, alongside Myisha Hines-Allen, Mariya Moore and Asia Durr. “This is about as close as I have been to the team in about five days. I’m very fortunate to have a great staff.  They know exactly what we’re trying to do and what we’re going to do. We all have each other’s backs, it’s something we pride ourselves on here.”

The coach’s eyes seem to light up as he heard his players discuss their commitment to getting better on defense going into Friday’s NCAA game against Arkansas Central.

“The coaches have been stressing defense all week,” said Hines-Allen. “When we played Syracuse (a loss in the ACC tournament), we didn’t play defense. Offensively, we can play with a lot of teams, we just need to work on defense.”

Music to Walz’s ears, the coach with the bleary eyes actually managing a smile.

“The tournament is what we’ve been preparing for for six months,” he said. “If you have a bad day in the tournament, we’re done. You might not make shots,  you might not do something you normally do well but you have to figure out a way to have a positive impact. If you’re not on the floor, be cheering.

“We played enough basketball now that our freshmen are no longer freshmen. Youth is not an excuse. We’re prepared, they’re prepared. We hope it’s going to be a great weekend of basketball.”

That would put the effects of flu a distant memory.