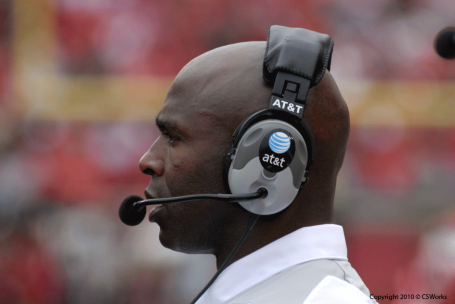 No matter how the final game against Rutgers turns out, the University of Louisville football program has made significant strides this season.

Charlie Strong has players on the defensive side believing in themselves, and he has given his offense reason to believe that the future will be better. The days of showing up and taking your beating are in the past for UofL football.

Until now, only one of the losses by more than eight points. Major improvement over the last three seasons. The exception, a 20-3 loss to Pittsburgh but Louisville was competitive.

A coach who has credibility with the fans even when opts to go for it on a fourth down in overtime and comes up short. The man believes in what he’s doing, making no excuses.

A person in charge who actually communicates with players and the fans. Haven’t seen that since John L. Smith.

A coaching staff confident of its ability to recruit three-star players, mixing in four-star recruits with a frequency previously unseen around these parts.

The town has taken to Charlie Strong’s approach, turning out to support him. Attendance increasing in one season from 32,000 to more than 50,000 fans per game. John L. is still shaking his head in wonder.

The six losses haven’t been easy. Because everything about the team seemed to improve so much, the losses were disappointing and frustrating, maddening for some.

That’s because Charlie Strong has already raised expectations to a point where fans are disappointed in anything less than a win. UofL football has come a long way in a very short period of time.

One thought on “Good start for Charlie Strong, Louisville football on right track”