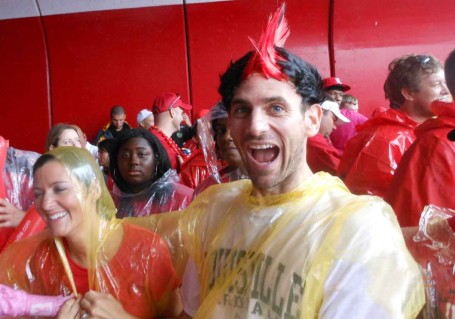 Aaron Edelen, a senior majoring in education at U of L, was there with Andrea, helping to create bedlam in the tunnel.

They held a Carch March Sunday at Papa John’s Cardinal Stadium but the University of Louisville football team didn’t show. Understandable with the steady three-hour soaking of the parking lot, the players were wearing suits and ties, needing to stay focused.

However, thousands of Cardinals’ fans squeezed into the tunnel leading to the stadium, a deafening place to be with all the cheering and a steady pounding of stadium balloons. UofL fans celebrating each other, hazing Kentucky fans brave or crazy enough to squeeze through the shoulder-to-shoulder throng. Rowdy and wild, a fun place to be for the faithful. 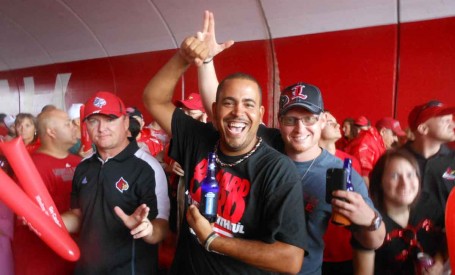 Maurice Dodson and friends found a dry place in the tunnel to consume beverages while anticipating the non-arrival of the football team.