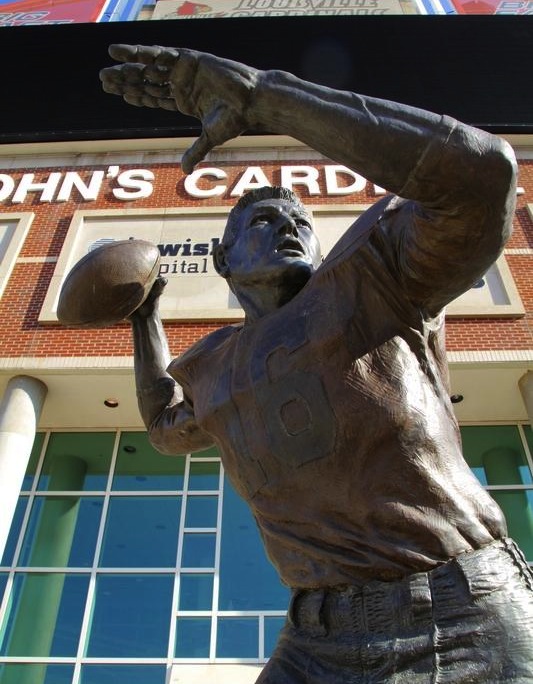 Papa John’s Cardinal Stadium will undergo expansion in the near future. No doubt about that with the growing demand for University of Louisville football tickets. The ticket office is getting ready to announce still another all-time record for season ticket sales. Tom Jurich reportedly has three sets of stadium schematics and probably has his development staff already at work on filling the suites to be added at the north end of the stadium.

If one can assume anything about the expansion, it is that the football team will have a real tunnel this time around. No more of those rubberized entry ways for an football program with national title aspirations.

So what happens with the Johnny Unitas statue when that part of the stadium has to be reconfigured? It’s a serious question, given Johnny U’s. Many players traditionally tap the statue for luck their way to the playing field.

Why not place the Johnny U at the main entrance to PJCS, at the edge of the Green Lot. The placement there would greatly enhance the entrance to the stadium while honoring an all-time UofL great and saluting his contributions to the game of football. While an impressive piece of work, the statue is dwarfed by all of the other distractions inside the stadium, not to mention being partially obscured by the tunnel during games.

Let’s face it. The exterior of the stadium, including the entrance, is pretty bland at present. The placement there would give Johnny U a whole new dimension, recognizing UofL’s growing football tradition. Fans, along with the football players, would be able to touch the statue for luck, upon entering the stadium after Card March every game.

Former Cardinal Shoni Schimmel has cooled off significantly since scoring 29 points and winning Most Valuable Player honors in the WNBA All-Star game in mid-July.

Since that game Shoni has scored 31 points in six games for the Atlanta Dream, failing to score in games against Chicago and Connecticut, three against Tulsa, and four against Washington. Her high of 17 points came against Asia Taylor’s Minnesota team, the next game after the all-star event.

“The rigorous schedule often catches up with rookies about this time of season,” said Brad Gust, media relations manager. “She’s okay and will be fine when she gets her second wind.”

So how has Adam DuVall, former UofL baseball player, been doing since he hit that home run in his very first game with the San Francisco Giants back on June 26?

He’s seen action in 12 games with 40 at-bats, currently batting .200, with eight hits, including two home runs and a triple.

He collected his second four-bagger on July 22, driving in two runs that put the Giants ahead of Philadelphia in a 7-4 win.