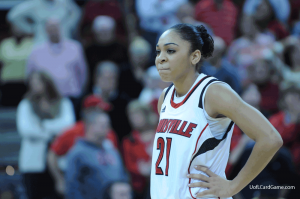 Someone or some thing lit a fire under Bria Smith Tuesday night, with the senior from New York dazzling a KFC Yum! Center crowd of 8,463, displaying an awesomeness never before seen in her.

Emerging from recent obscurity, Smith would turn in a triple double, scoring 22 points, 10 rebounds and 10 assists to lead the University of Louisville women’s basketball team to a surprisingly easy 89-67 win over Western Kentucky University.

It was all Bria all night long, scoring 15 points in the first half, putting UofL up 44-26 at half time. She would make four steals but commit five turnovers herself in a performance receiving high praise from Coach Jeff Walz.

“It was a great night,” Walz said. “She played with a lot of enthusiasm, a lot of passion. When she’s able to attack the way she did under control, it makes us a better basketball team.”

Smith’s heroics also opened things up under the boards with Sara Hammond and Myisha Hines-Allen scoring 16 points each and grabbing 10 and seven rebounds, respectively.

The UofL women, now 5-0, next face Lafayette on Friday.