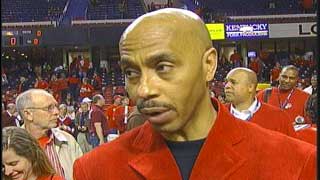 With the University of Louisville having captured its third NCAA tournament championship, some are wondering whether the University may decide to retire a player’s number.

Like maybe the No. 3 on jerseys worn by point guard Peyton Siva? Or the No. 2 belonging to Russ Smith?

The answer in Siva’s case is probably not despite the indispensable role he played in the championship run. Russ Smith has a much better shot if he lives up to expectations going into next season.

UofL has specific criteria for retiring numbers and only four players have had their numbers retired. There is one guideline, making it quite clear who can have their number retired, according to Kenny Klein, sports information director.

“To be eligible for retirement of a player’s number, the player must be, at minimum, a consensus All-America pick,” he told Card Game. Only four players in UofL basketball history have earned the honor. They are Pervis Ellison (42), Darrell Griffith (35), Charlie Tyra (8) and Wes Unseld (31).

So why are there so many banners with the names of former UofL players hanging in the rafters at Freedom Hall and the KFC Yum! Center? Well, there’s a big difference between “retiring” and “honoring” a jersey.

Klein says for a player’s jersey or number to be honored, the player must meet at least one of the following criteria:

Consideration may also be given for the player to have completed his eligibility for at least three years to be eligible. A committee shall present individuals for consideration to the Director of Athletics. Each player should be a member of a team which gained significant notoriety or earned a special place in Cardinal basketball lore.

The criteria for retiring or honoring player numbers in football is similar.