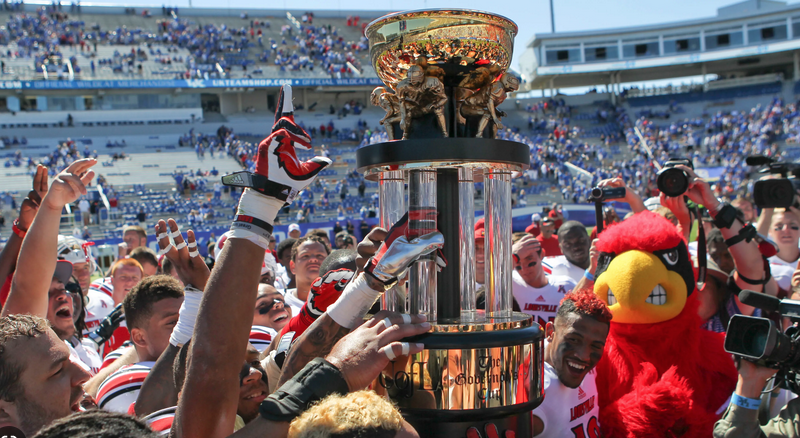 Getting the Governor's Cup was almost a given back in 2014 (Courier-Journal photo).
Football
Ed Peak 1 min read

The implications are huge for Saturday’s rivalry game  between the University of Louisville and Kentucky. Take a look at what it means for both teams.

For Louisville, eight wins during the regular season would be the most in coach Scott Satterfield’s tenure as the Cards leader.

A win would break a three game losing streak against the Wildcats and give Satterfield (0-2) his first victory over Kentucky.

UofL  (7-4) is going to a post season bowl no matter. A victory could push the 25th ranked (CFP) Cards up the invitational chain. It also would give Louisville another victory over a team that was once ranked in the top 25. A total of nine of the Cards opponents this season have been ranked.

For Kentucky (6-5), a win would give the Wildcat a winning season and a four game winning streak over Louisville. UK coach Mark Stoops is 4-4 versus the Cards over nine seasons. The two did not play in 2020.

Kentucky is seeking a lucrative bowl. The usually strong SEC will get preference even though the Wildcats are 3-5 in league play. Florida, Missouri and Mississippi State are wins while losses were to Ole Miss, South Carolina, Tennessee, Vanderbilt and Georgia. All are ranked except Vandy.

“I think Louisville is playing, very, very good,” said Stoops. “I know they are much more confident probably this year than they’ve been with the way they’re playing in some of the games we’ve had.”

On the other hand Satterfield knows how difficult this game could be. “Their defense is really good. They’re big up front. They keep everything in front, and they swarm. Their corners are jamming and are all up in the receiver’s face. It’s going to be a physical game everywhere.”

“We all know about this game,” said linebacker Monty Montgomery who was stopped by a UofL sports information director before he could elaborate further. He left the podium with a smile.