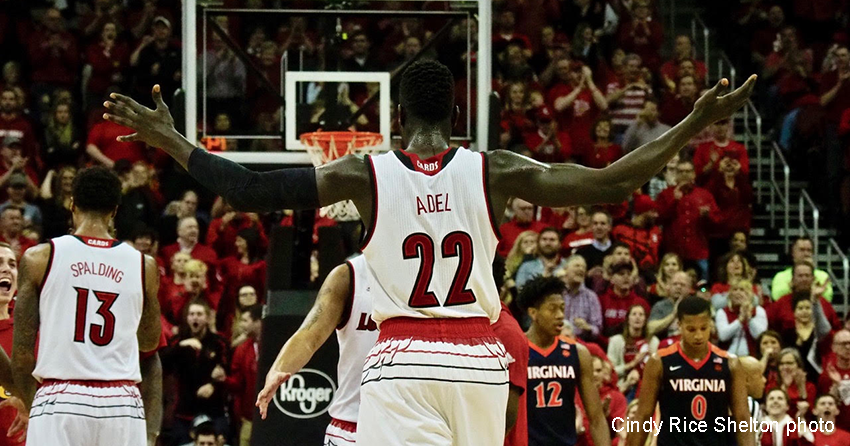 For 39 minutes and 59 seconds on Thursday evening, University of Louisville basketball was reliving the glory days, building on a glorious tradition, casting out the demons, putting the finishing touches on the nation’s No. 1 team.

Whut? Whoa. What should have been a routine ending suddenly takes a dramatic turn.

The dark clouds would re-emerge in that final second, slamming UofL fans in their collective gut, punishing them for their flirtation with exhilaration, shaming them for being optimistic. Back again, the implausible but undeniable scourge that has pummeled  the basketball program for months.

Louisville leading by four points with five seconds to go. Just take care of business. Wouldn’t happen, however. Darius Perry would foul a three-point shooter, cutting the margin to two. Deng Adel would travel on an out-of-bounds play, and De’Andre Hunter would throw up a 3-point shot with zero-nine-tenths of a second to go.

Virginia defeats UofL 67-66 to the absolute astonishment of 19,413 disbelieving Cardinal fans. That bloody dagger of a shot potentially a life-altering shot for members of the UofL coaching staff and their families.

One win could have decided so much for the program, a spot in the NCAA tournament for a young coach, making it next to impossible for David Padgett to be denied the permanent position. That’s all up in the air again, prolonging the continuing uncertainty.

So many downcast faces departing the KFC Yum! Center, many apparently believing this may have been the crushing blow for this team, some wondering if their team could recover. Typical reactions in the immediate aftermath of a loss, only one second away from shaking off some of the misery of the recent past.

Maybe all is not lost, however.

One must remember that Louisville was competing against the No. 1 team in the country. David Padgett had a good game plan, his players executed, and the UofL dominated Virginia for much of the game.  UofL would have won were it not for two improbable plays and one miraculous shot. That close.

In fact, the Cardinals may well have played their best basketball of the season in the past two games, after being written off by many after a 26-point loss to Duke. Just in time for the Atlantic Coast Conference tournament.