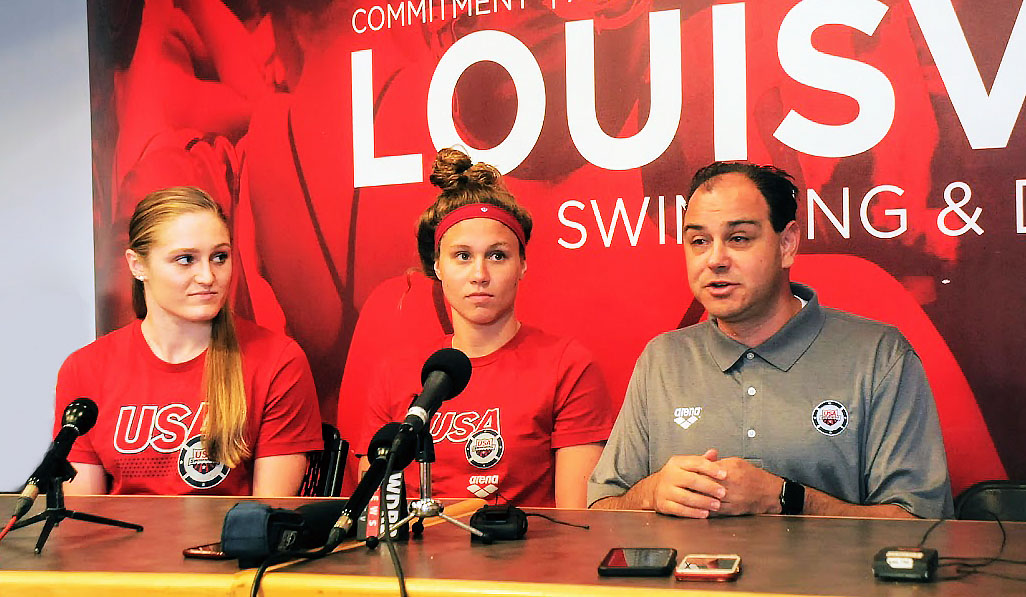 One can’t attend a press conference involving University of Louisville swimmers without getting the impression that the program is on the verge of achieving some major milestones in the near future.

Coach Arthur Albiero, who is in his 14th season at UofL next year, is on his way to Budapest for the FINA World Championships July 15-30 as an assistant coach for Team USA. Accompanying him on that trip will be UofL sophomore Mallory Comerford and graduate Kelsi Worrell.

“I’m just really excited to be able to learn from the people on Team USA,” said Mallory. “There are so many incredible opportunities being able to race against the best people in the entire world. So crazy and so amazing to have that opportunity.”

“I’m grateful that Kelsi and Coach Albiero will be around during the world competition at Budapest. It’s helpful to have some familiar faces and to be able to share the experience with them.”

Meanwhile, sophomore Zach Harting and senior Andrea Cottrell are preparing for the World University Games, scheduled Aug. 11-12 at Taipei, Taiwan. Harting will compete in the 100-meter butterfly, Cotrell in the 100-meter breaststroke.

Albiero’s son, Nick, a Christian Academy graduate who recently committed to UofL, became the 18 & Under US National Champion in the long course 100-meter butterfly in July in Indianapolis.

“We have a lot of fun outside the pool but we’re extremely focused and paying attention to detail when we practice and compete,” said Coach Albiero. “Our philosophy has been simple, we’re just trying to get a little bit better, each and every day.”

The UofL men’s and women’s teams ranked ninth and 10th, respectively, nationally during the 2016-17 season.