Obviously still some work to be done in some of the Olympic sports at the University of Louisville. 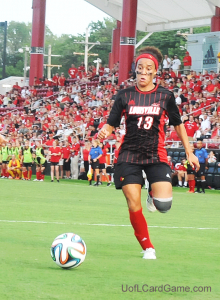 A record crowd of 5,862 showed Tuesday at the Yum! Center for the UofL vs. Kentucky volleyball meeting only to be crushed, seeing the Cardinals lose three out of four sets.

The volleyball team, which won the American Athletic Conference title last season with an 18-0 conference record, is 3-3 this year under third-year Coach Ann Kordes.

The women’s soccer team, under Coach Karen Ferguson-Dayes, lost to Kentucky still again last week, this time by a 2-0 score. It was UK’s fourth straight win over UofL in the sport. Dayes is in her 14th season at the helm.

The women’s softball lost both games against the Wildcats last season.

Not a good trend, and it’s not confined to Olympic sports, as Jeff Walz and Rick Pitino can attest.

Leonid Yelin, the former UofL volleyball coach, has moved on to Syracuse where he has compiled a 5-2 won-lost record in his third season. Yelin picked up his 500th career win in 2013, becoming the 32nd active coach to achieve the milestone. He brings his charges to the KFC Yum! Center on October 13.

UofL’s men’s soccer team hasn’t scored a goal since knocking No. 2 Maryland 1-0 three games ago and soaring in the national rankings to No. 2 in a couple of polls. The Cardinals lost to St. Louis 1-0 in Tuesday night’s game and tied Cornell 0-0 last Friday. Big test coming up against Duke Saturday at Lynn Stadium at 7:30 p.m.

Remember the career guidance program that Charlie Strong started for UofL football players last season? An idea that made a lot of sense and should be followed up on by Bobby Petrino. Former assistant Larry Slade was in charge of the program, receiving some assistance from Keith Thomerson, who sums up his experiences here.