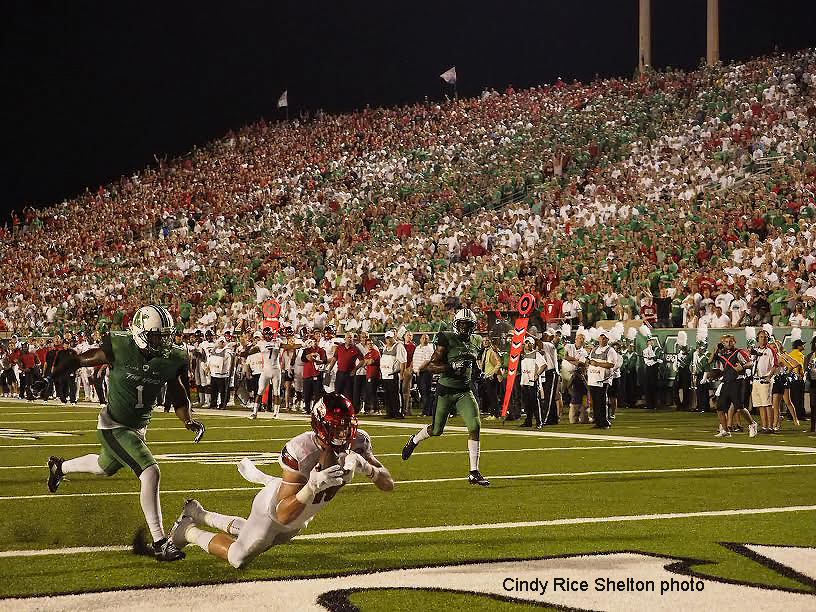 The sweltering heat of Indian Summer encompassed Joan C. Edwards Stadium in Huntington, WV on Saturday evening, as the faithful fans of the Louisville Cardinals arrived with one goal in mind: cheering their Cards onto victory against the Marshall Thundering Herd. For this reason, they journeyed the three-hour drive down I-64 East to arrive in time to attend tailgate parties and prime themselves for their mission.

Parking lots were dotted with red canopies directing us to where our fans were located. Under one such canopy, I had the pleasure of speaking with Linda and Jerry Oliver, and Susan and Steve Franklin. Both couples have been Cards fans for many years. What makes this year unique for them is, as Susan proudly announced, “It’s a bucket list item for this season for us to attend every single game, both home and away. So far, so good!”

Another canopy was home camp for a group of U of L medical students. Complete with chicken wings and a cooler, these young men were ready for the game to begin. “Saturday’s for the boys!” exclaimed Madison Seay, as they raised their drinks in anticipation of the celebration they would experience with another win.

The most memorable story came from the canopy housing a diverse group of both Cards and Herd fans. This gathering was organized by Thundering Herd fans and Huntington natives, Scott and Parker Ward. These brothers shared with us that they had lost a family member who was on that fateful flight in November 1970 when Southern Airways flight 932 carrying the Marshall football team and entourage crashed moments before reaching the runway.

Amidst a sea of green, waves of Cardinal Red were prevalent throughout the stands. Undaunted by the thunderous home crowd, shouts of “C-A-R-D-S, CARDS!” were heard just as easily as “We Are Marshall!”

As the game ensued and the point spread widened, the green in the stands became sparse. The Cards fans remained on their feet for most of the game, staying until the final siren sounded, keeping their team focused on the mission: Beat Marshall. Mission accomplished.