More improvements may be on the way to Cardinal Stadium, possibly as early as this fall, depending upon how the bidding process goes. The University of Louisville Procurement Office has issued a Request For Proposal (RFP) with specifications for interested contractors.

The project description includes the enhancement of entry points into the stadium, as well as the demolition of the existing ticket office and retail apparel store. In addition, there will be some reconfiguration of parking spaces in the Purple Lot for recreational vehicles and fans covered under the Americans with Disabilities Act. 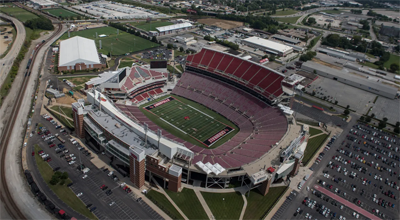 “We are seeking the bid to evaluate the project on whether we will choose to complete the renovations this year,” said Kenny Klein, sports information director. “It would create both new and expanded gates. This was part of our master planning through Populous before the pandemic hit.

“The primary purpose of the renovations is to ease entry into the stadium on game days, as you can see in the bid document that it involves several gates. Expanding the width of the stadium concourses is also planned within the renovation.”

Klein said the primary ticket office after the renovation would be located on the third floor of the Swain Student Activities Center, where it has previously been located. The advancement of digital ticketing, particularly this year with limiting touch points with the virus, has diminished the need for picking up printed tickets from the ticket office. The ticket office and retail space at the stadium moving forward is still to be determined. Donations to the Next Step Fund would fund the project should UofL choose to proceed.

“Should we make the decision to move forward to have it completed by the start of this season, we would have more information available at a later time,” he noted.  “Specifics could be adjusted based on the bids we receive.”

A pre-proposal conference for interested parties was held Wednesday at the stadium. July 2 is the deadline for completion of bids.