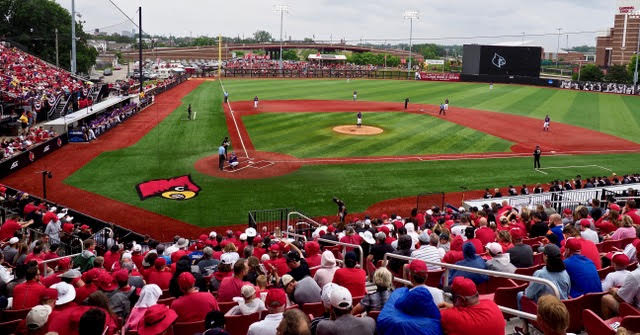 Ten University of Louisville batters up, 10 UofL batters down after the first three innings. Been there, done that a couple of weeks ago. Not a good way to get started in a Super Regional.

Not for long, not with Logan Wyatt ending the pitching dreams of East Carolina’s Jake Agnos. Second batter up in the fourth Wyatt would launch a double to right center field.

Tyler Fitzgerald would follow with another two-bagger, scoring Wyatt from second. The beating was about to begin.

When the inning was over, UofL had scored four runs on five hits, including another double by Danny Oriente and singles by Jake Snider and Drew Campbell. The Cardinals would follow up with five more runs in the fifth inning, three in the sixth and two in the seventh, burying East Carolina 14-1 in the opening game.

Left hander Reid Detmers, who has gone begging for support in more than a few games this season, was the beneficiary of the slugfest. He would be credited with his 12th win against four losses, allowing only five hits while striking out six batters.

UofL had 18 hits in the game, led by Fitzgerald with the first four-hit game of his career, along with four runs scored and two runs batted in. Dunn, Wyatt, Lucas, Alex Binelas, Snider, Oriente and Drew Campbell each had multi-hit games as well.

The win ended a 10-game losing streak to East Carolina. Couldn’t have come at a better time.

We cannot display this gallery