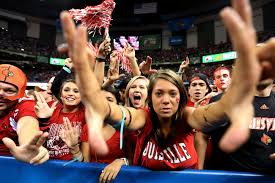 Not one but two party locations have been selected for NCAA pre-game activities for the University of Louisville vs. Kentucky Sweet 16 game Friday in Indianapolis. No cover charge at either location. Fans can gather UofL spirit squads at either the Colts Grille, 110 South Washington Street, or Champps Americana, 49 West Washington Street. The official pre-game parties, which are presented by GEICO Insurance, will begin at 3 p.m. Big screen TV’s at both locations, of course, and food and drink will be available for purchase.

For fans not traveling to Indianapolis, game watch parties will be held at Buffalo Wild Wings and Rooster’s Wings locations in Louisville.

A game watch party for the University of Louisville women’s basketball team’s NCAA tournament game Tuesday against Iowa will be hosted at Rooster’s in Middletown. Tipoff on ESPN is scheduled at 9:35.